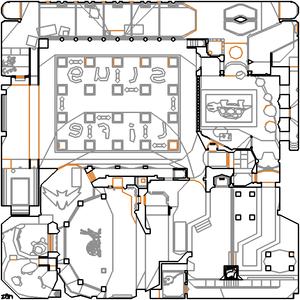 Map of Flompster Condo
Letters in italics refer to marked spots on the map. Sector, thing, and linedef numbers in boldface are secrets which count toward the end-of-level tally.

Climb the steps to a chainsaw and armor then turn left and head straight forward until you pass through a tall doorway - there are imps on a ledge ahead, and more imps (plus one or two revenants on Hurt Me Plenty (HMP) skill level or higher) will appear in the sludge trench ahead of you. Turn right and step on to a gray stone floor then turn right again and climb the steps in front of you to reach a doorway with vertical stripes on either side. Turn left and follow the ledge past some bookcases until you reach some more steps, climb them and kill the pain elemental that appears in front of you (plus a cacodemon on HMP or higher) then look north to see the red skull key ahead and run across the pillars to collect it.

After landing on the platform with the red key, drop to the ground and retrace your steps back to the area with the gray stone floor; this time, head west into a room with a snail picture on the floor. Deal with the cacodemon and shotgun guy on your right (plus spectres on HMP or higher) then press the lion switch they were guarding to reveal a second button behind you; kill a pain elemental that teleports in nearby then press the second button to reveal a white teleporter which will send you to a room with a tortoise on the ground. Kill the arachnotron and revenant in front of you on HMP (plus two spectres on Ultra-Violence (UV) and Nightmare (NM) skill levels) then head south-east to drop into a sludge trench. Follow the trench past the exit door and some shotgun guys then climb the steps at the end, kill several imps and look north to see a lion switch underneath three blue cables. Press the switch then head south-west to return to the snail room - a pillar holding the blue skull key has lowered, but you will need to deal with some chaingunners and cacodemons/pain elementals that are guarding it.

Go back to the starting room to find that the west wall has lowered to reveal (depending on skill level) chaingunners, spectres, an arachnotron and a revenant; step over this wall and look north to see a lift that will take you up to a door requiring the blue key. Open the door, kill the arachnotron in front of you on HMP then climb the steps and follow the passage east - you will be confronted by zombies and imps, as well as more arachnotrons on HMP or lower. Turn right when you reach the end of the passage to see a plasma gun on a patch of lava - approaching it will open a wall on your left to reveal revenants and mancubi, as well as two pain elementals on HMP and cacodemons on UV and NM (an arch-vile will also teleport in on HMP or higher). Once all the monsters are killed, go back to where you found the plasma gun and climb on to a white rock behind it - from here you can run east to land on another white rock to reach the yellow skull key.

Drop to the ground and head south to drop into the sludge trench again, then open the exit door on your right and climb the steps behind it up to a switch. Kill the monsters below then press the switch to lower the south-east pillar in the starting room which holds a partial invisibility, then run off the ledge to land on the pillar which will cause it to rise again. From this point you can straferun west to reach a switch that has appeared on the south-west pillar; alternatively, you can reach the pillar by retracing the route you took to find the red key. Press the switch to lower a gray column to the west, revealing the exit teleporter as well as an arch-vile on UV and NM.

Open the automap to see a picture of a rabbit in the south-east corner along with the numbers 452. This is a clue to which switches need to be pressed to open secret #4.

A super shotgun can be found in the middle of the starting room on HMP or lower. On UV and NM the weapon is instead found on top of the west wall, underneath an arch-vile.

Armor can be found by the coffee table in the tortoise room in HMP or higher, along with a shotgun on HMP or lower and a chaingun on UV and NM.

By the yellow skull key is an alcove containing a shotgun guy. Press the back wall of this alcove to open it and enter a narrow passage, then turn left and flip the switch at the end of the passage. This will lower a lift which you can ride up to a light amplification visor.

* The vertex count without the effect of node building is 4530.