MAP27: Fort Hades is the twenty-seventh level of Memento Mori. It was designed by Scott Lampert and uses the music track "DLA" by Mark Klem. 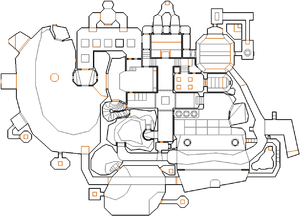 Map of Fort Hades
Letters in italics refer to marked spots on the map. Sector, thing, and linedef numbers in boldface are secrets which count toward the end-of-level tally.

Head straight out the door in front of you into an outdoor area, with a circular walkway around a nukage pit. Take out the zombiemen, shotgun guy and imp on the walkway. As you cross into the part of the walkway that is in shadow, up to three cacodemons will appear from a trap in the north. Dispose of them and flip the switch in their trap, which raises a bridge across the nukage, allowing access to a berserk pack. Considering the large amount of lighter enemies in this level, this will come in handy.

Go through the doorway in the west and follow the corridor all the way around until you descend two flights of stairs. Opposition is fairly minimal along this part of the level. Once that is done, turn south and head towards a room with a bright square on the floor (be wary of imps from the west, east and south). This central room will be called the "nexus", and will be a reference point for navigating the rest of the level.

First, head to the eastern arm of the "nexus" and go through the door. Clear out the demons (if any), kill the lone shotgun guy in the room in the east, clear the high ground of former humans, then turn your attention to the Hell knight (Hey, not too rough and below) or baron of Hell (Hurt me plenty and above) protecting a switch in the west side of this area. Kill it and flip the switch to raise stairs to the high ground. Go through the room in the east, then ascend the stairs to the top. From here, you can snipe out the monsters in the red key room (up to two mancubi, two revenants and a chaingunner).

Open the small door in the east of the "high ground", and follow the corridor down to a yellow door (which cannot be opened yet). Drop into the nukage river and head north to pick up a radiation suit from an alcove. From there, head south, then east along the nukage river, watching for an assortment of monsters. At the point where the river goes into a dark tunnel, make sure that you have picked up the yellow key before continuing forward.

At the end of the nukage river is a cavern with armor, two imps and up to three spectres lying in ambush. Clear them out, then find the switch in the northeastern side of the room. use it to lower a platform and ride it back up to the south arm of the "nexus".

Head to the eastern arm of the "nexus" and ascend the staircase back to the "high ground" in that area. Go through the door in the east, then open the yellow door across the slime river. Follow this corridor around to the red key room, then grab the red key. The blue door is here, but you can't open it yet.

Backtrack to the "nexus". This time, go to the western arm, ascend the stairs and open the door at the top to enter an open area. The floor has two imps and on Hurt me plenty and above, two zombiemen. The western ledge has more shotgun guys and a zombieman The eastern ledge has an imp or two, but on Hurt me plenty and above, there is also an arch-vile there. (If the arch-vile is not there, it has teleported to the western ledge.) Kill the arch-vile first, then clear everyone else out.

Climb the grey steps up to a door. This computer room is full of former humans. Follow it around to a door in the southwest. Kill the lone chaingunner ahead. From this room, you can see into the blue key courtyard and take out some of the monsters in there early. Your most important job here, though, is to face east and find the portion of the wall with large cracks. Shoot it with an impact weapon, and it will open, allowing access to the blue key courtyard.

Once again, return to the "nexus". This time, take the red door in the western arm, and ascend the steps to a wooden door. Go through it, and you will be on the western ledge in the open area where you fought the arch-vile. A large part of the western wall should have opened up to allow access to the blue key courtyard.

Enter the courtyard and find the switch in the northeast which lowers the blue key pedestal to the ground. When you grab the blue key, a trap opens in the north. This is a boss battle - on Hey, not too rough and below, you face two barons of Hell; on Hurt me plenty and above, you face a cyberdemon. On Hurt me plenty and below, you can grab an invulnerability from the trap, which will vastly reduce the difficulty of this encounter. Kite the boss(es) around the southern tree for maximum efficiency. The exit will be revealed in this area later, so you are advised to kill the boss(es) now.

Backtrack to the "nexus". This time, go to the north arm and ascend the eastern staircase to find a room with four teleporters. Open the red door in the east. This room may look intimidating, but the only trap that opens as you approach the switch is a sole chaingunner. Flip the switch to raise a bridge behind the blue door.

Return to the red key room. Open the blue door at the west side of the room. Clear the cage to your left (and on Ultra-Violence and above, the arachnotron on the bridge), then proceed forward. As you continue along the bridge, the bridge will lower, exposing you to two imps (and on Hurt me plenty and above, another arachnotron). Stay on the bridge until it raises - going through the two doors will only force more backtracking. Once the bridge has raised up again, continue into the opening ahead.

As you reach the end of the opening, you will arrive in an alcove overlooking the blue key courtyard. The walkway in the blue key courtyard will be lowering by now, releasing up to two pain elementals and an assortment of imps and revenants. Drop down into the blue key courtyard and deal with them. The exit door is in the southwest, but it is locked. To open it, go into the eastern trap (where the imps and revenants came from) and flip the switch to temporarily open the exit door. The first time you walk into this trap, another trap will open with up to five demons. If the exit door closes on you while fighting them, just flip the switch again to re-open it.

On Hurt me plenty and above, the exit room has one last cacodemon for you to deal with. Step into the teleporter to exit the level.

Because one secret is placed in a deathmatch-only area, you can only obtain 88% Secrets on this level.

A spectre (Thing 137) in the south-east has no flags set for any of the three difficulty classes, so it does not actually appear in the level.