MAP27: Gethsemane is the twenty-seventh map of Community Chest 2. It was designed by Mike "Use3d" Alfredson, and uses the music track "Deep Into the Code" from Doom. It was his first Boom map.

It is named after the garden where, according to the New Testament, Jesus and his disciples retreated to pray after the Last Supper, the night prior to his crucifixion. 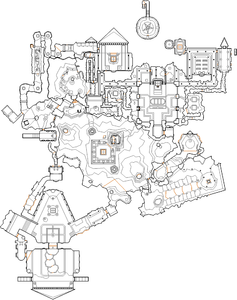 Map of Gethsemane
Letters in italics refer to marked spots on the map. Sector, thing, and linedef numbers in boldface are secrets which count toward the end-of-level tally.

From the start, head to the right staircase (left on the automap). Follow the path to a large room with a blood river and various monsters which includes a cyberdemon. Climb the river and flip the skull switch to prop the key downwards so you can retrieve it. Backtrack to the beginning and take the other staircase. Go east here and try to avoid the snaky, slimy floor as it slows you down. Go through the door and you will enter the largest area in the level right at the center. You want to drop down and enter the southeast door. In the next area, find the staircase on the far right portion of this place and climb it. Press the switch on the wall and quickly run through the door on the tiny staircase opposite of the switch, as it will close if you are too slow. Be sure to not drop down here before pressing the next switch to lower a nearby lift, although if you want a BFG9000, you may have to drop down and head further down this passageway to retrieve one. Be mindful of the arch-vile that appears as you approach it however, and then backtrack to the switch that lowers the lift.

When you ride it up, go through the next door on this level and you will end up in another large chamber, this one devoid of blood. There is a switch on the right hand side that opens up the right bars close to the north central structure. This leads into a hellish red area with a fork off to the left that leads into a chapel-like area. Here, take the door on the right side and follow the path. You will end up on the other side of the hellish red area. There is a switch here which opens the other door in the chapel area. You should press this and head back there and find a teleporter which takes you to the north central structure of the big chamber. Hit this switch, as well as the switch you see on your right to open the next set of bars on the lower floor.

Here is another hellish red area, with a nearby switch. This one is timed, so when you press it run right, past the columns as fast as you can and at the fork, head left before the door closes. Drop down and simply follow the path back to the hellish red area flipping yet another switch. This opens a door, but it is back behind the timed switch door, so you have to hit that switch one again. When you get past that door, do not drop down but turn right and into the next area through the newly-opened door. Again, do not drop down yet, instead go down the winding walkway until it dead-ends at a switch. Be mindful of the ceiling that lowers as you approach the switch though. Then go back and drop down into the cavern. Climb the red blocks up and back into the big room. Bars will appear preventing you from reaching the center, but you should not worry about this, as you just need to go right a bit to the next room with an arch-vile inside a crate.

To open the next hall, go down to the pathway (be very careful as the red slimy floor here slows you down and can do a lot of damage if you linger in it) and open the door to the next switch to remove the barriers to that hall. You will have to cross a thin wall over damaging slime to get to the next area. Watch out for the lost souls as you do. After that, the next rocky bars will open for you when you approach them. Take the lift up. If you pressed the switch guarded by the crushing ceiling earlier, the pentagram teleporter should be open, and it takes you to the central structure in the central cavernous room. Take the door here and the lift to the interior of this structure. Flip the switch and take the red key and return to the surface. Be careful of pain elementals and cacodemons, and leave the structure. Find the teleporter on northwest base of the structure to return to the beginning of the central room, then go back to the starting point. Go around the walkway until you reach the red and blue key switches, then open the way to the exit.

* The vertex count without the effect of node building is 7879.