MAP27: Halls of Cocytus is the twenty-seventh map of Whispers of Satan. It was designed by Kristian Aro, who also wrote the music track for this level, "Cryonic Dreams". 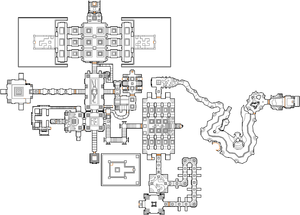 Map of Halls of Cocytus
Letters in italics refer to marked spots on the map. Sector, thing, and linedef numbers in boldface are secrets which count toward the end-of-level tally.

Press the switch, rise up, and open the door in front of you. Pick up the shotgun in the first hall. There are two side paths here, ignore them and go straight to the next hall with the armor and two side paths. Take the one to your left. Open the door and follow the hall to another door where you will be in a room with the yellow skull key on a large block. Press the switch near the lift on the left to lower it, then ride it up and go around to the switch at the end. Hit it to lower several monster closets as well as the large block, and imps will teleport in to prevent you from getting the yellow key. Kill them and grab it, then head back to the main halls. Take the hall that is directly ahead of you when you exit and go down the stairs to the yellow door. The red key is behind it, so here is what you need to do to get it. You need to hit the lion switch at the base of its pillar, then run into the southwestern compartment, hitting the switch there. Now run into the northeastern compartment and hit the switch there. Repeat for the southeastern and then the northwestern compartments, and you will be able to obtain the red key. Do this as fast as possible, otherwise the compartments will close and you will have to start over. Also look for the cacodemons on the sides as well as the imps inside of each compartment.

After you get the red key, return to the main halls and go back to the lower hall. Take the path branching to the east, climbing down the stairs killing revenants along the way until you reach a red door. Open it to appear in a library with two distinct paths to take in order to clear the bars to reach the blue skull key. Taking the northern path, you will wind up going through a long, linear cavern. Stay on the outer bend to avoid the lava when you reach it, and go all the way east to a dilapidated marble structure with a switch. Press it and return to the library. The southern path is also a linear path, this time through a wooden hall. Open the door at the very end, and go around the shelf to find a switch. Press it, and an arch-vile appears behind you guarding a berserk pack, while other enemies will appear in the hall you just went through. Fend them off, and return to the main library. After you have pressed both switches, you will be able to get the blue key on top of the stairs. Watch out for the trio of mancubi appearing in front of the door behind you, and then exit and return to the main halls. Enter the blue door to the far north and in the next big room is a cyberdemon dead ahead. To open the exit door, head for the sides and hit the two switches to open the exit door, looking out for imps, demons, arachnotrons, and mancubi as you do so.

If you want a chaingun, head down the first hallway to the left.

In the long, linear cavern on the north path to unlock the blue skull key, when you reach the area with lava, look towards the lava for an opening in the cavern marked by a stick full of heads. Inside is a megaarmor, a medikit, and some ammo.

* The vertex count without the effect of node building is 8220.

In Greek mythology, Cocytus was the second of five rivers the dead had to cross on their way to the Underworld. Cocytus translates to "River of Lamentations".