MAP27: Hell's Masterpiece is the twenty-seventh map of Perdition's Gate. 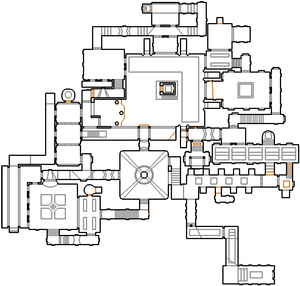 Map of Hell's Masterpiece
Letters in italics refer to marked spots on the map. Sector numbers in boldface are secrets which count toward the end-of-level tally.

At the start, follow the path until you reach an intersection. Go up the stairs to your left, then go around the circular fountain and climb the stairs ahead. At the top of the first set of stairs turn right, then enter the room and climb up the stairs to your right to collect the red key. As you do so a section of the floor behind you will fall down. Drop into it and look to your right to spot a pool of blood and an inaccessible structure containing a red door within view.

Instead, go to the left to arrive at the room with the circular fountain. Make your way towards the intersection seen at the start and this time go east. Climb up the stairs to your left at the end, then turn left and enter the corridor to your right. Move to the west of this corridor to spot blue bars to your left and a switch to your right. Flip the switch, then return to the entrance of this corridor and go north. Follow the path into a room with a square fountain on its middle.

Approach the west side of this room to locate a switch to the north, then press it. This will raise stairs allowing access to the structure seen previously. Make your way to it, then enter the red door and use the switch inside. Return to the room with the circular fountain and go all the way to the west from this room. To your left is a new area, follow the linear path to the blue key and a switch. Flip the switch to lower the bars to your left, then make your way to the blue bars seen previously. Open the bars and pick up the yellow key in front. Proceed towards the blood pool again and once you reach it go to the west. Climb up the stairs then turn right to find yellow bars to your right. Open the bars, then follow the linear path to the exit teleporter.

* The vertex count without the effect of node building is 2126.