MAP27: Hell Sewage is the twenty-seventh map of Claustrophobia 1024. It was designed by Joonas Äijälä (Jodwin), and uses a MIDI "Punk Rock Remix" of the Hyrule Castle music from The Legend of Zelda: A Link to the Past, composed by CarboHydroM. 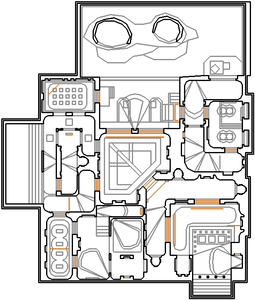 Map of Hell Sewage
Letters in italics refer to marked spots on the map. Sector numbers in boldface are secrets which count toward the end-of-level tally.

Hell Sewage is the author Joonas Äijälä's (Jodwin) first serious mapping effort since his previous release in May 2007. Work on the map was begun on October 17th 2008, and the first version was finished and submitted to Claustrophobia 1024 three days later. The map was inspired by the idea of the player fleeing from an overrun facility through a sewage system. Rest of the map was built around that premise with the goal of creating a 1024 map with a slight Hell Revealed-feeling. The map went through more playtesting than any of the author's previous creations, utilizing help from the author's friends. During this playtesting the item placement in the map was tweaked a lot, as the testers and the map author had greatly differing views on the map's difficulty level. Eventually the playtesting resulted in inclusion of the early plasma rifle and the lowering walls on the map's arch-vile battle, which were considered to improve the map's playability and the number of tactical options given to the player.

Until the last Claustrophobia 1024 test builds Hell Sewage's automap had been disabled, except for a few scattered lines. When asked about the automap, the author admitted he did have a reason for disabling the automap, but he had already forgotten what the reason actually was. With the author's permission the automap was then made visible, as it was widely considered detrimental to the map to have it disabled.