MAP27: I'm Gonna Blow Ya Up! is the twenty-seventh map of 32in24-5, a deathmatch megawad. It was designed by Matt Cibulas (RottKing) and Sarah Mancuso (esselfortium), and uses the music track "Requiem for the Gods," originally composed by Michiru Yamane for Castlevania: Symphony of the Night, sequenced to MIDI. 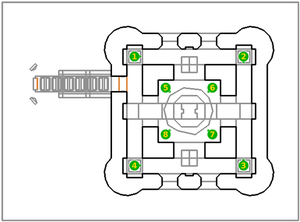 Map of I'm Gonna Blow Ya Up!, cropped to only show the playable area 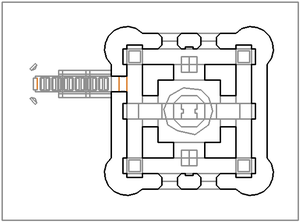 Map of I'm Gonna Blow Ya Up!, cropped to only show the playable area

This is a comically small map, with most of the playable area confined to a 512-unit square. Given the map's extremely claustrophobic nature, it is only fitting that the only weapon available is the rocket launcher, given to each player on spawn. Frags will be accumulated quickly on this map, and players can expect to be killed often by their own blast damage. The hallway surrounding the square's centerpiece is just 64 units wide (for reference, the width of a player is 32 units), and a single medikit is available on each side. Whilst the centre piece is 256x256 units in size, it does not allow much extra breathing space due to the pillar in the centre.

The exit switch is available from the north-west corner, through a door leading to a short levitating pontoon. Due to its relatively long length (which is in fact only 312 units), and accessibility from only a single direction, it may be possible to use the exit room strategically.

This level contains eight spawn points, all of which get a rocket launcher on spawn: