MAP27: Malebolge is the twenty-seventh map of Doom 2 Unleashed. It was designed by Brian Knox (Snakes) and uses the music track "Octo" by Kevin Schilder.

When using the music WAD included with this megawad, this level instead uses the music track "Diyablo" by Paul Corfiatis. 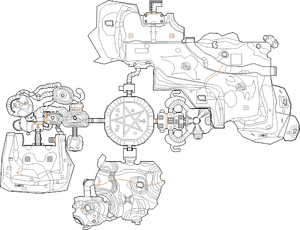 Map of Malebolge
Letters in italics refer to marked spots on the map. Sector, thing, and linedef numbers in boldface are secrets which count toward the end-of-level tally.

As soon as the level starts step forward to collect a berserk pack (and an armor that is underneath you) then kill the approaching demons and imps. Go through the tunnel in front of you to enter a cavern with more imps and demons, then head north-west into another tunnel and follow it round until you see two demons in front of you, as well as a revenant on Ultra-Violence (UV) and Nightmare (NM) skill levels. Head forward past the crucifix on the floor and open the metal doorway to reveal a staircase with a chaingunner, imps and shotgun guys. Climb to the top of the steps to enter a small valley - watch out for cages on either side containing imps (or Hell knights on HMP or higher) as well as imps and cacodemons on the surrounding ledges.

Kill the approaching demons then head forwards between the blood pillars to find a rocket launcher next to a low step with a knight. Go north-west from the rocket launcher to get on to the steps and follow them south, east and north until you can get on to the red ledge overlooking the valley, then follow this back round to a skull switch. When you approach the switch five monsters will teleport on to the red ledge - cacodemons on I'm Too Young To Die (ITYTD) and Hey Not Too Rough (HNTR), knights on HMP or mancubi on UV and NM. Press the switch then go back round the red ledge to find that a wall has lowered - go through it to drop into a small passage with shotgun guys, leading to a small cavern. As you enter two chaingunners and an imp will appear without warning. Kill them then go to the west wall to find the red skull key sitting in a small window.

Approaching the red key will open part of the south wall - go through it to find a super shotgun then follow the passage back to the area with the crucifix. Try to go into the passage on your right (leading back to the start) and bars will suddenly appear to block your path - the wall ahead will also disappear, revealing two arch-viles on HMP or higher. Kill them and head into the passage they were guarding to see an arachnotron (or three on HMP or higher) through a doorway, then step through and turn left to see a set of steps guarded by demons and revenants depending on skill level. Go up the steps and press the eye switch at the top to lower the floor and reveal a tunnel on your left, which you can follow past four demons (or spectres on HMP or higher) and an armor pickup to reach a round cavern with three revenants.

Head south-west into another tunnel to find a spectre guarding a satyr switch, press it then head back through the first tunnel (watching out for some monsters that have teleported in) until you see an opening in the right-hand wall. Go into this opening and head up the steps to a ledge overlooking the round cavern, then follow the ledge to another tunnel which will lead you to a gargoyle switch protected by a knight (or a baron of Hell on HMP or higher). Press the switch to open a wall behind you and look through it to kill an approaching arch-vile on UV and NM, then step through to to find a plasma gun, watching out for a mancubus that appears on your left. Go south to return to a cavern near the start point then head east to find a wooden door requiring the red key, open it and kill the four demons waiting behind it (plus a chaingunner on HMP or higher).

Climb up the steps to reach a large circular staircase and follow it down to its east side - depending on skill level you will encounter pain elementals, spectres and cacodemons on the way down. At the bottom of the steps kill a waiting knight on HMP or higher then open the wooden door and kill the demons waiting behind it, along with two shotgun guys and an arachnotron on HMP or higher. Go through the door, noting the knights waiting on either side, and climb the steps ahead to the blue skull key - it will disappear as you approach, and two columns holding revenants will lower behind you along with the walls next to them. Kill the revenants then go through either of the openings in the wall and head down the steps to an octagonal cave, watching out for an ambush on the way down.

When you enter the cavern, go to the north-east corner to find a lion switch - press it and kill the arch-vile that appears in the blood pool next to you, then go to the north-west cave entrance and press the satyr switch that has been revealed here. Pressing the satyr switch will lower part of the south wall and release three to five revenants - kill them then go into the chamber they emerged from to find a gargoyle switch, which will lower the west wall and allow you to reach the blue key but also causes a number of imps and demons to teleport into the cave along with an arch-vile. Once everything is dead, grab the backpack and boxes of shotgun shells by the west wall then take the blue key sitting in a small alcove.

Backtrack to the circular staircase room but use caution - when you open the door to the blue key area you will find that the inner wall has lowered to reveal a spiderdemon on HMP or lower or a cyberdemon on UV and NM, and when you start shooting a number of knights, cacodemons and mancubi will teleport in as well. Get as many monsters as possible to infight with each other then kill the survivors and open the south door between the blue skull markers. Kill the approaching imps then go through the door, kill two chaingunners hiding on either side and go through the diamond-shaped opening to a large red cavern. As you enter, kill the mancubi to your left and right then climb up some steps to reach the second tier of the cavern.

Kill the imps waiting on the ledge then head west through a doorway to enter a low passage. Go round the corner to confront some revenants then exit the passage to a smaller cavern where six cacodemons are waiting. Step into the blood pool on the east side of the cavern and you will be able to climb some steps leading round the large column, ready to kill a revenant that appears at the top (or an arch-vile on UV and NM). Head east to find a passage leading to the top tier of the larger cavern, where two or four arachnotrons have appeared (three mancubi can also be found here on HMP or higher, unless you killed them from below). As you leave the passage head straight forward and climb up some stone steps, then go due east until you reach the east wall to find the yellow skull key sitting on a small step, as well as a BFG9000 on ITYTD and HNTR.

After getting the yellow key you have a choice of routes to get back to the circular staircase room - if you head north and drop down the ledges then a cyberdemon will appear at the cavern entrance on HMP or higher, but if you retrace your steps through the smaller cavern with the cacodemons then you can avoid this trap. After you return to the circular staircase room, go to its north side and open the door between two yellow skull markers, ready to kill three revenants waiting on the other side. Go through the archway to a set of red stairs and kill the imps waiting round the corner, then climb the steps to the top to get outside and find a supercharge. As you take the item, be prepared to kill two barons to your left and right as well as some revenants that appear in front of you.

Head east past some mancubi until will reach a blood stream - when you step over the stream a spiderdemon will appear to the north, on the opposite side of a blood river. You may wish to ignore it for now and head south-east to a satyr switch at the top of some red steps - pressing the switch will raise a bridge leading to the spiderdemon and also cause a large number of demons, imps, knights and revenants to teleport into the area. The spiderdemon may be able to help kill some of these monsters, but if you are taking too much damage then there is another supercharge in a blood pool north-west of the satyr switch. Once the spiderdemon is dead, cross the bridge to its location and head north-east into a small chamber containing a lion switch which is guarded by some knights.

Press the switch and head back outside to find that a cyberdemon has appeared on the south bank of the river, or two on UV and NM. Go west to the area where you encountered the gang of revenants to find that another bridge has risen over a blood pit to the north, leading to a wood platform with two arachnotrons. Cross the bridge and approach the lion switch, which will open to reveal a passage with an arch-vile (or two on UV and NM). Kill or push past the monsters then go round the corner and press the computer skull switch ahead to finish the level.

A megaarmor can be found east of the spiderdemon in the exit area next to two medikits.

* The vertex count without the effect of node building is 6548.