MAP27: Monster Condo is the twenty-seventh map of Doom II. It was designed by Sandy Petersen and uses the music track "Waiting For Romero To Play". The par time is 5:30.

In the Sony PlayStation and Sega Saturn versions of Doom II, this level leads to the final level, MAP54: Redemption Denied. 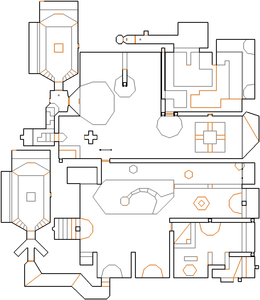 At the start, go towards the east and go through the door. Pick up the rocket to reveal a larger library with baddies. There are two skull switches on bookcases by the south side of the room; hit the east one to reveal more enemies. Push through to the invulnerability sphere and get the yellow skull key next to it. More Hell knights will be released (or imps on I'm Too Young To Die and Hey Not Too Rough skill levels), and another one will when you grab ammo in the back of the new room. Hit the skull switch in the last alcove to re-open the bookcase so you can escape.

Exit the library, go east and touch the floating skull rock to lower a wall with imps. Pass it and go west towards a door at the end of the corridor. In the large room hit a switch in the northwest corner to lower a large chunk of floor. Go through the door and then the yellow key door to its right. Climb the stairs towards the end and get the blue skull key. Jump towards a platform in the center of the room and you will be sent to a similar room. Hit the switch in the east wall and shoot the north wall. Hit the switch there and go through the door while trying to avoid the revenants and mancubi. On the other side of the door, quickly open the center wall. Follow the corridor and lift platform towards the end and hit the wall behind the invulnerability sphere and go through it.

You will be sent to a small room. Hit the wall in front to return in the large room where you were heading towards the yellow door before. Watch out for numerous revenants in the room and go towards the blue key door. Hit the switch and get red skull key in the midst of the knights. Go to the door beside the blue one and hit the first switch on the north side. The floor will lower. Go towards the narrow corridor, pass the arch-vile and step on the sky behind the red key door to finish the level.

Secret #6 cannot normally be reached in order to be triggered due to being behind a teleport linedef, making it ordinarily impossible to get 100% secrets without cheating. However, via use of wallrunning, it is possible to trigger a linedef skip to obtain the secret. This is not presently required for 100% completion under Compet-N rules.

There are two computer area maps in this map (see secrets #7 or #8 above), which makes it impossible to get 100% items, since the player can only pick up one map per level. However, some source ports allow two to be picked up as a way to achieve the status.

The red key door by the exit is only eight units wide, and the opposite side's linedef is set to linedef type 1 (no key required, monsters can open). This allows the arch-vile to open the door by bumping into it (see Monsters open locked doors).

It is possible to get trapped on the ledge with the pain elementals and BFG9000 if the player uses the teleporter (secret #5) to get up there without having first ran across the trigger which opens up the ledge (the trigger that opens the ledge is just to the right of the blue skull switch that controls access to the teleporter).

Sector 80, the red key door marker in front of the exit, has a ceiling flat of FLOOR4_5, but the surrounding ceiling has FLAT5_2.

This level has a type 10 door (sector 11) that closes when 30 seconds have elapsed from the start (see secret #1). If the door is prevented from closing by standing in the sector, the door will reopen as usual, but its ceiling will pass the level of the adjacent ceiling and go on rising. If the player allows the ceiling of the door to rise high enough (by spending about two minutes) and then moves into the sector or out of it, the game will likely crash and display the error R_MapPlane. The problem has been fixed in many source ports, and when playing on them, the ceiling will stop at an appropriate height if the door is forced to reopen.

As some shelves in the library work as doors, they may crush monster corpses to the pools of gore. The arch-vile presented in the library (on Hurt Me Plenty or higher) gives a great likelihood to encounter ghost monsters.

Linedef 342 is set to be impassable even when it should be physically passable. The linedef is located next to the skull switch that lowers the platform to the red door.

According to designer Sandy Petersen, this level was inspired in part by a recurring nightmare about a library with a secret room containing something horrible.[1]

The official French name of this level is Chez les monstres. Literally, "House of Monsters" or "The Monsters' Place".