MAP27: Mount Pain is the twenty-seventh map of TNT: Evilution. It was designed by Drake O'Brien and uses a music track shared with MAP08: Metal and MAP30: Last Call. 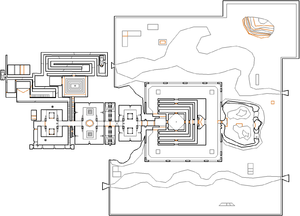 Map of Mount Pain
Letters in italics refer to marked spots on the map. Sector numbers in boldface are secrets which count toward the end-of-level tally.

To get the super shotgun and the shell boxes be fast. They lie under a slow crushing ceiling. Knock down the shotgun guys in this room and head west. Turn right and descend down the stairs. The walls here differ having dark brown color. Be careful, there is a slime on the floor. Wear a radiation suit at the far end in the west and return here. Face north (you can see a web) and proceed down the corridor. Go all the way straight. At the fork do not turn left but keep going straight to maze and the end of it.

When you finally reach the end you will see a wall to your left which has an inscription reading "Disaster area". Open it and you will be in a room with yellow lamps at the center. Take a security armor at the southwest of the room, and a wall will lower revealing some enemies, items and ammo. Collect something, and another wall will lower revealing more enemies. Kill them. Enter an alcove to the south. The stairs will be build up. The staircase will lead you to the familiar area, but do not rise for now. Cross at least two steps and return back to that room. A wall to the left is opened and contains revenants and demons. Take a freshly revealed invulnerability sphere at the center to your advantage. Eliminate the enemies and enter the wall they were in. Take the red keycard. Now return to the staircase and rise. When you approach a dead end, press use on the wall to open it, and you will be in the familiar area. Turn left to return to the starting room.

Head east in the starting room. Dispatch the imps. You will see two cages having arachnotrons (or Hell knights depending on the skill level). You cannot shoot them nor they can see you. Open the wooden door. It requires the red key, although is not marked by any bars. Another similar door will appear in front. It requires the blue key and you do not have this key yet. Approach this door and return back to the room with the cages. They have to be opened now. Dispatch the enemies that were confined in the cages. Inspect the cages for the blue keycard. Return to the unmarked wooden door and open it.

Accessing the outside area; exit

Open the door. You will be in a room with three doors. Open any one, but it is desired to open the door in front of you. Later, open the door in the east of the corridor. Enter a door in the south or north. Open the last door in the east of the corridor. Take the yellow keycard. Backtrack to the room where you saw three doors. The room became dangerous because of the damaging floor, but a radiation suit has appeared now. Wear it and knock off the cacodemons. Enter the western door. The walls to your left and right are opened now revealing the outside. Go on the safe border towards east where you meet a switch. Flip this switch, and a floor on the left will sink down. Drop down and enter a metal wall, requiring the yellow key (unmarked).

A cave which follows further is rather dangerous. It contains some tough enemies which can hardly be eliminated from your position. For that reason, drop to the crag on the left. Eliminate the revenant or a chaingunner on this crag. Eliminate the revenant which occupies position at the cave opening. Kill the chaingunner which occupies position at the southeastern cave opening (if present). Kill the only mancubus. You can now obliterate the arch-vile (if present) located on the second crag. Now, when it is all clear notice a brightened lift that can bring you to the second crag. Use it in time in order to not wait when it will lower for you. The bottom in the cave hurts. Face east. You will notice a hell sky opening and some lost souls. Drop down there and you will be teleported to the large area. Drop down in order to end.

* The vertex count without the effect of node building is 1806.