MAP27: Playground is the twenty-seventh map of Doom 64, designed by Tim Heydelaar, and the last "fun" level. It can only be accessed by the "Features" menu. It uses the music track "Warped" also heard in MAP18: Spawned Fear. 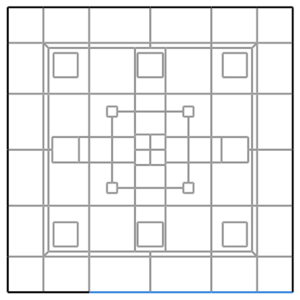 Map of Playground
Letters in italics refer to marked spots on the map. Sector and Thing numbers in boldface are secrets which count toward the end-of-level tally.

The level starts as a closed-off arena set in a hellish environment. The player starts off in the middle of the action surrounded by a multitude of pillars topped with arachnotrons. Strewn along the floor at the feet of the pillars are a rocket launcher, multiple rocket boxes, a few stimpacks, and a blur artifact hovering over each of them that cannot be avoided; once the player grabs an item underneath, he will automatically pick up the sphere. This makes the battle against the arachnotrons harder to deal with as the arachnotrons' shots become more erratic.

Once the player kills all the demons, a megasphere will spawn in the center of the map. Collecting the megasphere will trigger the sides of the arena to lower, exposing more rockets and a cyberdemon.

Once the cyberdemon is killed, the arena's walls lower and unleash an army of mancubi coupled with even more rocket boxes. Once the mancubi are defeated, the level ends and takes the player back to MAP01: Staging Area.

Collecting all blur spheres at the start allows you to safely grab items later in the level without re-applying the partial-invisibility effect.

* The vertex count without the effect of node building is 151.