MAP27: Red Hot is the twenty-seventh map of Plutonia 2. It was designed by Sam Woodman, Vick Bobkov and Thomas van der Velden, and uses the music track "Outpost of Destiny" by Paul Corfiatis. The par time defined in MAPINFO is 5:30. 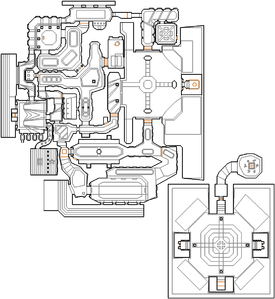 Map of Red Hot
Letters in italics refer to marked spots on the map. Sector, thing, and linedef numbers in boldface are secrets which count toward the end-of-level tally.

Pick up the super shotgun in front of you and take the dark passage to the next room. A large horde of imps and shotgun guys is ahead, so destroy them and head north through the next hall. Keep going until you see the yellow skull key behind some bars. You cannot reach it yet, of course, so take the nearby steps down to a lower area. Look out for a teleporting monster ambush, then press the lion switch, being wary of a few more enemies coming in. Now head southeastward and kill the enemies around this area. You will want to head south towards the mancubus, as it is the only place you can go at the moment (the other paths are a dead end and the blue door), and then east and up to the next door. The large outdoor area that follows has cacodemons and three paths. The north and south ones require keys, so go through the east path and into the teleporter. When you emerge, you will see a spider mastermind on top of the red skull key. Kill him and grab the key.

To leave this area, you need to press the two lion switches on the east and west sides, looking out for many demons that attack you as you press them. This opens up the north side, with a berserk pack and another switch, which opens up the teleporter to the south. Taking it takes you back to the previous open area. With the red key, take the red door to the north. Kill the monsters as you make your way to a room with another berserk pack and a switch. This one opens a passage in the previous hallway, which takes you back to the yellow key, which is now accessible. As always, prepare for a few teleporting monsters, and then return to large open area. With the yellow key, take the yellow door to the south. There will probably be a lot of shotgun guys and some mancubi running about, so dispose of them and continue until you reach a switch. Although it does not lower the nearby barricade, it does open up a wall leading to a different passageway. Keep going until you reach a soul sphere. Grabbing it triggers the barricade from before to lower and many enemies will teleport around the area. The room north of the soul sphere contains the blue key, so do not forget it. With all of the keys now in your inventory, head back to the blue key door that you remembered from before. Kill the chaingunners and arch-vile and hop in the teleporter. You will be back at the spiderdemon/demon area, and this time, the northern switch has been lowered. Follow the path behind it to find the exit.

Depending on the skill level, between 10 and 17 monsters cannot be killed without cheating:

* The vertex count without the effect of node building is 3218.