MAP27: Resistance Remains is the twenty-seventh map of Hell Revealed II. It was designed by Sam Woodman and Andy Olivera and uses the music track "Inner Fear," by Petter Mårtensen (Thyrbse). 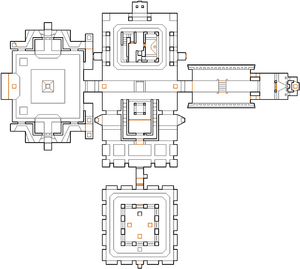 Map of Resistance Remains
Letters in italics refer to marked spots on the map. Sector, thing, and linedef numbers in boldface are secrets which count toward the end-of-level tally.

Much like the original map, you will be fighting off against very large hordes of monsters in open fields. Ammo is plentiful so you should not worry about it. When you have the opportunity, head into the first building and open the door to get the yellow skull key. Then open the yellow door nearby. Climb the steps up and press the gargoyle switch. This allows you to cross the bridge where the arch-viles were. Collect the megasphere, then climb up either stair set with rocket boxes on it. At the top, you will find a lift leading down into another yard and a switch. Press the switch first, and kill the arch-viles beyond the demon wall. Grab the plasma gun and face off against a cyberdemon, then look north for a switch to shoot. This opens up the door in the yard behind you. This hallway has arch-viles and another door leading to a monster-infested courtyard. Kill everything then head to the back of the courtyard to find the blue skull key. With it, you can enter the central room where a spider mastermind is. In this room, you can lower the two side columns for boxes of shotgun shells, and the north column has a switch which lowers the southern column. This one is a teleporter, taking you to one of the arch-viles' platforms.

Press the blue switch to open a part of the canal leading westward. This area is also highly congested with monsters, including mancubi on the bottom floor and revenants and arch-viles behind some of the fences. Drop down and head northeast to find a lift you can use. Ride it up and follow the path, going into the teleporter to the opposite side of the area. At the end are some energy cell packs and a mancubus. Stepping there lowers you to a teleporter, take it to wind up in the center of this area. Move around to find a switch, which lowers you, but also teleports in two cyberdemons on blocks. Kill them and head back to the northeast lift. This time, there is a new teleporter with an arch-vile on it. This teleporter takes you to the back of this area where you can retrieve the yellow skull key. Now to leave this area, head up back to the northeast lift and take it back up, following the trail as you did before. When you lower, take the teleporter to the south this time to appear on one of the arch-viles' platforms in the initial area.

Now hit the red switch to open up the eastern walls of the canal. You will fight several imps and a cyberdemon. Moving straight ahead causes arch-viles to teleport behind you, so watch your back. Go under the bridge and through the next door. When you approach the switch, it will disappear and even more arch-viles will appear. Kill them, then wait for the walls to lower, kill the final arch-vile, then exit the map.