MAP27: Ruby Abyss is the twenty-seventh map of Community Chest 3. It was designed by Eric Baker (The Green Herring), and was the author's first completed and published level. It uses the music track "Inferno's March," composed by Baker specifically for the map; the only other level in the megawad with this distinction is MAP15: Clash of Galaxies, by the same author.

It takes place inside of a large, red, rock cavern, where blood flows everywhere, with a blue and red energy pillar in the center. There are four distinct sections of the level which must be fought through; as each section is completed, the pillar rises to reveal a smaller pillar until the exit is opened. 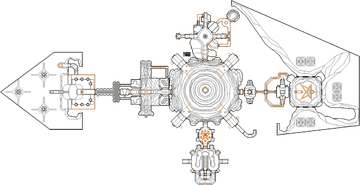 Map of Ruby Abyss
Letters in italics refer to marked spots on the map. Sector, thing, and linedef numbers in boldface are secrets which count toward the end-of-level tally.

The ceiling of the doors leading into secret #1 (sectors 51 and 418) are eight map units under the floor.

When the walls open to reveal monsters in the north of the level after obtaining the yellow key, three of the linedefs under the rising wall in the southwest (linedefs 2435, 10648 and 10650) are set as lower unpegged. As a result, the textures on these linedefs move along with the wall.

When the pentagram stairs are built in the east, the sections of the bridge keep the blood flat until the stop moving, whereupon they instantly change to a metal flat. This also happens with the bridge built in the west, whose sectors keep the red rock flat until they stop moving, after which they immediately switch to red marble flats. This is due to a programming error in Boom's generalized linedefs, in which texture changes are called when the sector stops moving no matter which direction it is going.

* The vertex count without the effect of node building is 10724.

This level was started in January 2007 for a project that was never finished, with the working title of Matryoshka in reference to how the energy pillars in the center of the level rise to reveal smaller pillars in a similar fashion to Matryoshka dolls. The MAP27 slot was originally taken by Daniel Gimmer (Tormentor667) on December 11, 2006; on June 9, 2007, he switched to MAP06: Foregone Destruction. That same day, Baker, an external playtester for the project at the time, asked to take the MAP27 slot with the southern and northern sections of the level completed, and his request was granted. A beta of the level was sent to playtesters on July 7, 2007, having gained its final title by this time, and the level was completed and submitted on July 9, 2007.

The level contains a large number of impact-trigger switches, used in two puzzles and for one secret. This is because at the time the level was built, the author frequently played Duke Nukem 3D, in which buttons can be triggered by gunfire, a fact exploited for certain puzzles.

The music for this level was started on June 28, 2007 and completed the same day. It was later remixed by James Paddock (Jimmy) as "Inferno's March (Creepy Remix)."

The level originally did not end with a boss fight in the center; the player simply ran onto the central pillar to exit. However, players Brian Nesser (Anima Zero) and Richie Agnew agreed this was an anticlimax, and Nesser suggested the dual cyberdemon fight that appeared in the completed level.

If you activate the noclip cheat, head out the eastern side of the level onto the red cliff and look at the wall, you will find a message reading "TGH says: Quit using noclip!" If you use noclip to go all the way to either end of the cliff at the west of the map, or all the way to the end of the tunnel behind secret #4, you will find a message that says, "You're not supposed to be here! -TGH" These are homages to professional level designer Richard Gray, who is well known for hiding Easter egg messages in his levels, often accessible only by cheating, most notably in his levels for Duke Nukem 3D.