It's in fact 8 maps situated in space connected into the one. In each part you get one new weapon so you are beginning with pistol and berserk and ending with BFG. And surely, the gameplay becomes harder and harder... but not so hard I think. In this map I aimed more at design so maybe the gameplay suffers somewhere...

And it reminds eight minigolf holes in space. 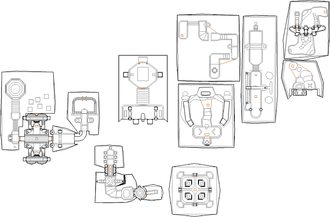 Map of Stairway to Heaven
Letters in italics refer to marked spots on the map. Sector numbers in boldface are secrets which count toward the end-of-level tally.

* The vertex count without the effect of node building is 3941.