MAP27: Terror is the twenty-seventh map of Scythe. It was designed by Erik Alm, and uses the music track "Waiting for Romero to Play", from Doom II. 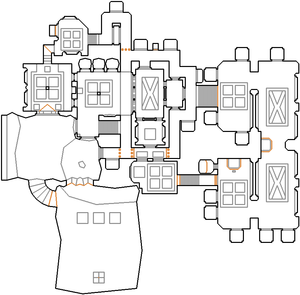 Map of Terror
Letters in italics refer to marked spots on the map. Sector numbers in boldface are secrets which count toward the end-of-level tally.

At the beginning, get your weapons and get rid of the monsters. Head through the blood trench until you find some stairs up to a large library, grabbing the super shotgun and rocket launcher in the rooms along the way. Go through this library killing monsters and grab the yellow skull key at the end. Now head back to the blood trench, looking out for opened bookshelves with monsters inside of them. Go to the yellow bars (they are near the starting point) and open them, going to the next area. Head through here to a small room, head through this room to the next one to find the red skull key. Look out for Hell knights who teleport in, then return to the library going back to where the yellow key was. While doing so, more monsters will be available for killing. Go through the red door, and you will eventually find the blue skull key guarded by four barons of Hell. Again, backtrack through the library being wary of newer monsters, then open up the blue bars in the blood trench. Make sure to grab the BFG9000 in the center before heading westward outside. Climb the rocky stairs up and you will teleport onto a pentagram, forced to pick up a blur artifact and facing up to three cyberdemons. If you attempt to jump for the megasphere on the pillar, you will teleport back to the library, with a cyberdemon attacking from the north. Go back to where the yellow key was to find the exit door open.

The megasphere that is located on the pillar is out of reach, but skilled players have been found capable of accessing it by means of arch-vile jumps. However, before doing so, you must make sure that your current health value is high enough to survive an arch-vile attack. This concept is similar to accessing the outdoor megasphere in TNT Evilution's MAP11: Storage Facility.

* The vertex count without the effect of node building is 1378.