MAP27: The Silos is the twenty-seventh level of Memento Mori II. It was designed by Paul Noble and uses the music track "Shadows of the Dead" by Mark Klem.

Sit down Marine, make yourself comfortable, for once this mission starts there won't be any rest, not even for the wicked...

Mission Objectives. This mission is imperative to the success of Operation Memento Mori 2, the missile base which you'll be dropped into has fallen into the hands of the enemy, they don't know what they've got but we do. The site is a Guidance array and missile launch centre. Our Space Marines have been fighting a continuous battle in the space around the orbital platforms and have managed to force the main bulk of the demon hoards onto the biggest orbital platform (codenamed Icarus), [sic] unfortunately this platform is very well armed and we cannot make a landing on the platform to reclaim it. Thus it has been decided that it is to be destroyed utterly. To this ends [sic] you must enter the missile base, reconfigure the missile guidance array in the South East corner to point to the space platform, then you must seal all the silos ready for launch - all the silos have a double lock mechanism, make sure that all the lock switches are activated. Then finally you must activate the launch sequence, once done we can beam you off the base and onto your next mission.

Infiltration. We have set up a drop site near the old Sentry gateway, this area should still have some weapons stocks of some sort near by...

Enemy deployments. Reports claim that the Missile base is infested with all manner of humanoid killers, be they demon possessed troopers or the evils known as Mancabus, [sic] they are high tech, but in the brain department they are not up to much - think before you run in, if you can get them fighting each other then they'll do half your work for you. You'll find that there are serious concentrations of enemy operatives the further you progress through the base, be prepared for all manner of opposition...

Priority. Seal all the missile silos and erect the missile guidance array, then get the hell out of there.

This is going to be one helluva mission and the Earth Force are relying on you, make em eat hot lead death! 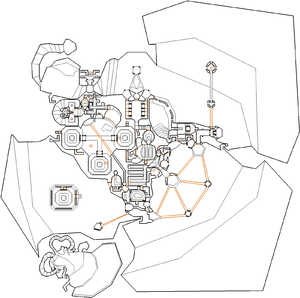 Map of The Silos
Letters in italics refer to marked spots on the map. Sector, thing, and linedef numbers in boldface are secrets which count toward the end-of-level tally.

Note: This level allows the player a vast freedom of movement and numerous route possibilities. For example, parts 1 and 2 can be explored in a reverse order (blue key first).

From the start (secret #1) turn left (south), then right (west) at the intersection with a short lamp in the middle. In a big room with revenants, grey floor and nukage look for a narrow passage in the southern wall. Take the teleporter at the end of the passage.

Having arrived in a similar passage, follow the wall on your left until you find a door. Open it and enter the room (secret #2). On the wall to your right (south) there are two portions of wall with lights at the bottom - these are lifts. Take the lift on the right (it only goes up, while the second one only goes down). Open the eastern door. (The northern wall is missing the yellow lights at the bottom. Open it to find secret #3.) Press the red wall to open it as well. Find a switch behind the computer panel with four clips on it. Flip it and run in the direction of the red wall which has just opened (east). If the walls close before you reach the eastern corridor (the one in front of you), use the skull switch to open these again. Flip the western (red/green light) switch. Return to the room with the computer panel, pressing switches on your way if the walls close again. Now open the door to your left (south), go straight, open the door with yellow marks, run the catwalk, go through the UAC door and grab the yellow keycard.

Jump out of the window and enter the octagonal building decorated with "technical columns". As soon as you enter, the platform you are standing on will lower. Turn left and go to the dead end while the platform is being lowered. Activate the switch to your left - it will open one of four barriers blocking way to a skull switch needed for further progress (part 3). Leave the building. Go north to the passage and return to the start via the teleporter which earlier warped you here.

At the intersection with the short lamp in the middle choose the eastern way leading to a big, open area with towers. Open the UAC door to your right (south). (Secrets #4 and #5 are found in this room.) Turn left 90 degrees twice. A portion of grey wall with a dark grey square is a lift. Ride the lift up and jump down to the platform on your right. There is a blue keycard here - pick it up. (Enter the room, go south on the ledge and ascend the stairs to the east to access secret #8.) Walk down the ledge to the dark room, go towards its southeastern end where the stairs are and follow the corridor ending with a lift. Take the lift up to the top, turn right (west) and open the door. (Pass the door in front of you the access secrets #6 and #7.) Turn right again, open another door, turn left, open the southern door (lower than two previous ones) and enter the teleporter. In a huge room with three silver towers with flashing UAC signs, enter the towers and flip one switch in each one. They open three remaining barriers to the skull switch. Three newly revealed red/green light switches can be ignored.

Find the now accessible skull switch at the north. Flip it and wait until the huge dark grey curtain lowers. Climb up the stairs and go through the doorway.

Follow the wall on your left. Open the silver door leading west and enter the room. Press 'use' on both computer panels. Go down the stairs and press the skull switch. Return to the silver door, go straight at the first intersection and left (west) at the second, in front of the BFG9000. Ride up the lift, press the switch and return to the skull switch.

To the opposite side of the skull switch (east) there is a newly opened narrow passage. Go up the stairs leading to the red keycard. Take the key.

Go back to the silver door, then to the room with three UAC towers. There is a door to the south of the eastern tower. Open it, press the switch lowering a lift, ride it up, go up the stairway, and past two previously opened doors. When you stand on the lift platform, it will lower immediately. Stand facing east. There is a passage to the east between the top and bottom level, but the lift does not stop there, so press 'forward' when the lift goes up again and enter the passage. Take another lift up to arrive in a tower (silo) with a double door and a switch.

Return to the silo with the double door. Open it and then open the red key door to the east. Go either left or right, climb the stairs and turn around. A portion of the wall between two skulls is an illusion. Walk through the fake wall and press the switch. Go downstairs, press the switch raising the catwalk and run to the exit.

* The vertex count without the effect of node building is 2922.

The appearance of "Icarus" in the mission briefing for this level is a reference to TeamTNT's Icarus: Alien Vanguard, supported by its description as a demon-infested space vehicle, although Icarus's story describes the original ship as an "exploration cruiser" instead of an "orbital platform," and features demons invading the ship rather than being forced into it. This reference is presumably intended as revenge against TeamTNT for the controversial postponement of TNT: Evilution's originally freeware release, due to its being acquired by id Software for publishing in what would become Final Doom. Similar jabs toward Duke Nukem 3D appear in the mission briefings for MAP04: Ratamahatta and MAP18: Regulate.