MAP27: The White Lady's Garden is the twenty-seventh map of Project Einherjar. It was designed by Mike MacDee (Impie) and uses the music track "". 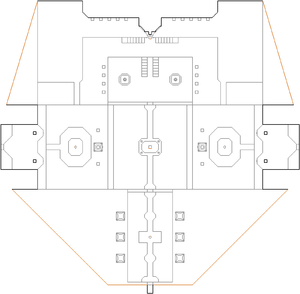 Map of The White Lady's Garden
Letters in italics refer to marked spots on the map. Sector, thing, and linedef numbers in boldface are secrets which count toward the end-of-level tally.

This map is straightforward, consisting of three arena brawls. The opening brawl is against a gang of Ghosts with several Purgers on the ledges above. Hit the statue switch to lower the gate to the courtyard: grab all the supplies and hit the second switch to lower the walls to the left and right: each reveals a platoon of Purgers and Ghosts supported by a Sky Hound helicopter, plus a statue switch. Flipping both switches lowers the furthest wall, revealing three Einherjar. When this happens, Einherjar Zira makes her second appearance back at the start point and joins the fray. When she is killed, the stairs to the exit raise.

After the Zira Einherjar appears for her rematch, run back to her entry point for a free Gauss cannon.