MAP27: Underground Train is the twenty-seventh map of Daedalus: Alien Defense. It was designed by Ty Halderman. 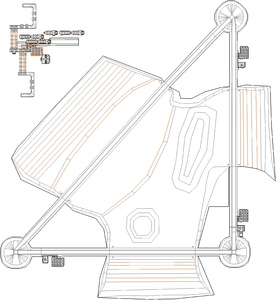 Map of Underground Train
Letters in italics refer to marked spots on the map. Sector, thing, and linedef numbers in boldface are secrets which count toward the end-of-level tally.

* The vertex count without the effect of node building is 7067.

By making appropriate texture changes, altering Teleport_NewMap destinations, and by opening/blocking key areas as appropriate, this one map acts as the underground stations for all three of the hub's principal maps, Federation Systems Control, Language Labs and Classrooms and Launch Site.

The skybox and camera effects used to simulate the motion of the train were very new to the ZDoom engine at the time of development.