MAP27: Unruly Evil is the twenty-seventh level in the Ultimate Doom episode of PlayStation and Sega Saturn versions of Doom. It is based on the original E4M4: Unruly Evil with modifications made to adapt to the consoles' limitations. The author of the original map is American McGee.

Unlike the PC version, finishing this level takes the player directly to MAP28: Unto the Cruel. This is due to the levels They Will Repent, Against Thee Wickedly and And Hell Followed not appearing on consoles. 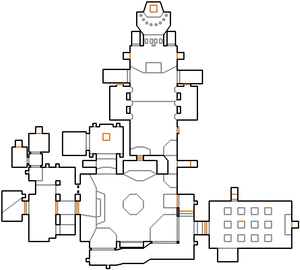 Map of Unruly Evil
Letters in italics refer to marked spots on the map. Sector, thing, and linedef numbers in boldface are secrets which count toward the end-of-level tally.

Return to the outside area and look north - you will see a lion door which requires the red key. Go through it to a room with ledges on either side. press the switch on the east wall to lower the lift ahead. Take the lift to the upper floor, and you will see teleporters either side of you. Step into the left teleporter, which will put you on the west ledge, then turn left and press the first switch. This will lower one set of bars blocking the exit, and open two alcoves containing monsters.

Take the lift to the upper floor again, but this time step into the right teleporter to go to the east ledge. Turn right and press the switch, which clears your path to the exit and opens two more alcoves with monsters. Use the lift again and head straight forward to the teleport pad, which is the level exit.

The first outdoor area has three lava pits in its south-west, south-east and north-east corners. Drop into the north-east pit and then step into the east alcove to find a partial invisibility powerup, as well as a teleporter to get you back to ground level.

From here, drop into either of the southern lava pits to find a hallway containing a chaingun on its south side, as well as several health bonuses in the corners.

From this hallway, go through a door to the east to find a lava pit with twelve square platforms. On the east side of this room is a ledge holding a soulsphere and an invulnerability powerup, as well as a teleporter back to the hallway you came from. Two of the columns have hidden switches, indicated by brown textures instead of green ones, which perform different actions when pressed.

I am a Wimp and Not Too Rough only: Near to the end of the level, there are two lowering walls which go down when corresponding switches are flipped. But they contain one spectre each, which prevent the walls from going down. The spectres can be killed by using the rocket launcher, plasma gun or BFG9000. Doing so will allow the walls to go down (and crush the dead spectres). It is the only way to get 100% on kills at the end of the level. On Hurt me Plenty and higher, this does not occur because the spectres are replaced with (one or two) cacodemon(s).

Ultra-Violence only: In the same locations, there are two cacodemons behind each wall which block each other, leaving them unable to move or attack until one of them is killed. This bug is also present in the PC version.

A few cosmetic changes were made to this level compared to the PC version.

* The vertex count without the effect of node building is 535.