MAP28: A Bridge Too Far is the twenty-eighth map of Congestion 1024. It was designed by The Flange Peddler and uses the music track "Death's Bells," originally composed by L.A. Sieben for TNT: Evilution. 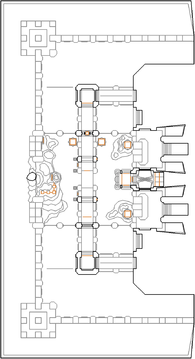 Map of A Bridge Too Far
Letters in italics refer to marked spots on the map. Sector, thing, and linedef numbers in boldface are secrets which count toward the end-of-level tally.

At the start, drop down to the left and go to the right to find a switch on the left side. Flip it then turn around, climb up the rocky stairs to the right and press the switch on the right. Drop down to the ground in front, cross the lowered bridge and go around the structure in front to find its entrance. Inside, use the blue switch on one side to raise the floor, allowing access to the blue key behind you as the floor finishes raising. Flip the skull switches to the sides to lower the pillars holding the yellow and red keys, then press the satyr face switch to lower the floor again.

* The vertex count without the effect of node building is 1881.