MAP28: A Lightbridge Too Far (Valiant)

MAP28: A Lightbridge Too Far is the twenty-eighth map of Valiant. It was designed by Paul DeBruyne (skillsaw) and uses the music track "Moon/Mars: Sukarabe Fight 3" from The Hybrid Front. The par time is 15:00. 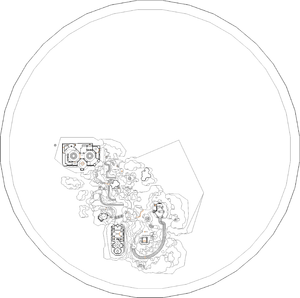 Map of A Lightbridge Too Far
Letters in italics refer to marked spots on the map. Sector, thing, and linedef numbers in boldface are secrets which count toward the end-of-level tally.

Use caution at the start, as a cybruiser is waiting behind the wall in front of you, and on Hurt Me Plenty (HMP) skill level or higher there will be super imps to your left and right. Head north into a hall with ledges on either side and go up the steps in the south-east corner, then walk north towards a switch at the top and kill two zombiemen (or shotgun guys on HMP or higher) that are revealed to your right. Pulling the switch will raise a lightbridge across the hall for a couple of seconds - run across the bridge and kill one or two chaingunners that are revealed in front of you, then walk north to another switch and flip it to raise another lightbridge leading east. Run across it and kill any imps that are revealed (plus a suicide bomber on Ultra-Violence and Nightmare), then walk north to a third switch and pull it to raise a lightbridge that leads to the ledge in the north-west corner of the hall.

Flipping the switch here will lower the floor and reveal two super demons to your left, as well as opening the north doors to reveal two cybruisers. Go through the doors to find a rocket launcher and three circular platforms with backpacks, then continue north to an area with two curved steps that have rockets on them. Head north past a super mancubus to some shotgun shells then go up the steps on your left to find a switch being guarded by a pyro knight and some other enemies; dispose of the enemies before flipping the switch as it will raise two lightbridges over the curved steps you just saw, but only for a limited time. Follow both bridges and collect a supercharge at the end of the second bridge, then drop into a pit where mancubi, imps, cacodemons and arachnorbs are waiting. Below you is a pool of damaging black liquid with another curved platform in it - head round the north end of this platform to some steps leading out of the pool, flip another switch at the top then walk south-east to a blue teleporter guarded by a revenant that will return you to where you found the supercharge.

The large door to the building ahead of you has now opened, releasing more imps. Go through the door to a hall with two large circular platforms, kill any enemies waiting overhead then walk west to the second platform, which will cause demons and imps (plus an arch-vile on HMP or higher) to teleport in behind you. Activate the lift by the second platform and ride it up to confront two pyro knights, then turn left to see a plasma gun and energy cells surrounded by barrels (taking the items will release two cybruisers) before running through the north doorway to land on a ledge below. Follow the ledge round to a switch and flip it, which will raise lightbridges above the circular platforms but will also release chaingunners, demons and a cybruiser (plus a pyro knight on HMP or higher) behind you. Enter the teleporter behind the cybruiser to return to the plasma gun room, then go through the east doorway and run north to land on the lightbridge above the first platform. From here you can run north-east to land on a ledge below before walking north to a door leading outside.

Open the door and kill some waiting imps and bombers, then flip the switch on the nearby tower to raise a lightbridge from the curved platform you saw earlier. Follow the bridge to another pool of black liquid and head towards the steps on your right, avoiding some lost souls on either side of them, then climb to the top and be ready to avoid a super mancubus and revenants that are revealed ahead. Continue south along the gray path and push past an arachnotron and pyro knights waiting round the next corner, then walk forward until you get to a white floor - an arch-vile will teleport in behind you so kill it before it resurrects any monsters. To the east is a large building that contains a cyberdemon - go to the ledge on the north side of this building and follow it round, passing imps and larger enemies, until you reach a switch being guarded by a mancubus. The switch will raise a lightbridge leading inside the building, but will also cause one to three pyro knights to teleport in nearby.

Fight your way past super mancubi, arachnorbs and cybruisers to return to the west side of the building, then proceed south towards a spiderdemon that has teleported in. Continue south past the building in front of you to reach the lightbridge you just raised, then run along it while dodging fire from the imps and arachnotrons on either side; you may need to drop off the bridge to avoid a crowd of imps that teleport in to block your path. Once you reach the end of the bridge and enter the building, kill or dodge the cyberdemon and go up the steps at the back to reach the exit teleporter.

After you leave the starting building, go up the steps on your left to reach a building containing a megaarmor and some large ammo pickups. Leave the building by the east doorway to find a switch that will raise three lightbridges from the circular platforms below, letting you step across to a super shotgun.

After crossing the curving lightbridge with the armor bonuses on it, you may see a light pillar ahead with a megasphere on it. Go up the steps to your right then turn right to find a narrow ledge that leads round to a switch; flip this switch to lower the megasphere.

* The vertex count without the effect of node building is 8748.