MAP28: Abyss is the twenty-eighth map of Doom 2 the Way id Did. It was designed by Xaser in the style of Sandy Petersen. The par time is 7:00. 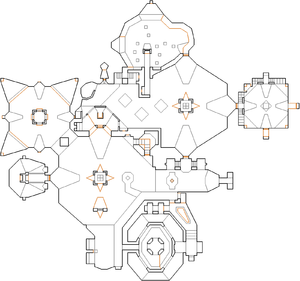 Map of Abyss
Letters in italics refer to marked spots on the map. Sector, thing, and linedef numbers in boldface are secrets which count toward the end-of-level tally.

Drop down and do a little walk around at the bottom. This will open the alcoves. Enter one of them and head eastward (you can obtain super shotgun westward in this corridor). Walk on the blood pool and walk up northward. Press the switch to build up the bridge in the next large area you will get soon. Backtrack to the starting area and use the western tunnel of light to get out. Walk north a bit and notice the black tall structure with red rock patches in the middle. Drop down and step on the light (either one of four around) created by these patches. You will be teleported right to the top of this structure facing west. Jump over west into the alcove with yellow rock walls.

Enter the door. Enter the fake teleporter which lowers walls north and south. When done with annoying monsters head to the western side of this room and turn around. Enter the red, actual teleporter. You find yourself in the tall area with dangerous lava in the bottom. Drop down south-eastwards and enter the alcove with blood smeared wooden walls and enter the teleporter pad.

This one brought you to the tall area similar to the previous one but the ground is watery, hence safer. Drop on the white teleporter, turn around and press the switch. Afterwards, re-enter the (or any other) teleporter. You can now drop from the lift towards the southern "isle". Flip the switch to raise the lift more. Drop down and re-enter the teleporter(s). Do this more two times. When the lift is on the heighest level you will find yourself inside the ceiling closet when you teleport to this lift. You can now press the switch inside this closet which not just lowers the lift itself but lowers the western "isle". Step on this isle while it is lowered then flip the switch atop which lowers four alcoves in this area. Drop down, kill the disturbing monsters and enter white teleporter pad north west. Press the switch to your left (which looks like it was already pressed), and the platform with the yellow key will rise. Re-enter teleporter to get back to the watery area. Use now the north eastern teleporter. Go up the stairs (the wall should now be open) turn left and jump on the platform with the yellow key to grab.

With the yellow key, use the southern yellow door and teleporter. Head straight and press the skull button. This will raise one platform for the way towards exit. Head back to the teleporter. Drop down to the south-eastern alcove and enter the teleporter to get to the watery area again. Lower the lift and take the south eastern alcove, the only one with no any teleporter. In the large area step on the light of the familiar structure. At the top, drop northwards and enter the door that requires yellow key. You will be immediately teleport to the revenants when you enter for the first time. Jump off eastwards and press the skull button to raise up the second platform for the way towards the exit. Now, drop down to the large area that is very similar to the previous one but with brown slime. Walk eastwards and step on any light of tall structure. Drop northwards and open the yellow door. By going on the red path get to the western part of this area (the problem is that the floor may go down revealing alcoves, so you certainly need to jump over the tall pillars). When in the western part go to the southern room. Turn left and press on the skull upwards. This time all of the three platforms are risen, make your way towards exit.

Return to the previous room and get back to the eastern side (as you cannot directly go on the red path you need to drop down and use the northern teleporter then jumping on the pillars to get there). Once back in the brown slime area, step on either light around the tall tower. Now facing west make your way by jumping on these three platforms (using straferunning). Once in the western side, open the exit door and enter the "sky" teleporter.