MAP28: Alien Ship is the penultimate level of Strife. It uses the music track "Action".

With the completed Sigil in his possession, Strifeguy enters an alien structure deep underground to find whatever force is controlling the Order and destroy it. 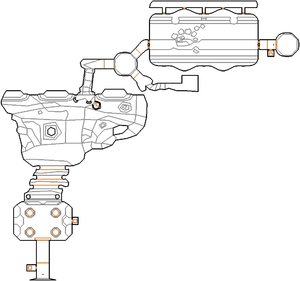 Map of Alien Ship
Letters in italics refer to marked spots on the map. Sector, thing, and linedef numbers in boldface are secrets.

Head forward into a large room; the entrance will be sealed behind you. Collect all the supplies in this room, then throw the switch behind a low wall on the east side to open the way forward and release four reavers. Head north and go down the steps; the wall in front of you will lower to reveal a large cavern with numerous enemies including an inquisitor; using the Sigil will allow you to destroy it quickly, and its bolts may eliminate other enemies in the cave. It is also possible for the inquisitor to fall down the deep pits here from where it will struggle to escape.

Once the path is clear, head across the bridge between the pits and through an opening in the wall to the north. Follow the tunnel through to a green passage and destroy two stalkers waiting here, then lower the lift and ride it down to the bottom floor. Go through either of the sliding doors ahead, then follow the bridge to another set of sliding doors. Open them and head forward to the Entity's lair.

After stepping on the lift leading to the large bridge, let it take you up to the top floor. The tunnel here leads to a small room with healing items.

Two things (143 and 144) use the invalid type 0 but also have no flags set for any of the three difficulty classes, so they do not actually appear in the level anyway.

This level includes the same number and types of things regardless of skill level.