MAP28: Baron's Lair is the twenty-eighth map of PlayStation Final Doom and is the fourth level of the Plutonia episode. It is based on MAP06: Baron's Lair of the PC version (originally designed by Dario Casali for Plutonia Experiment) as an adaptation with colored lighting applied and some simplifications done on level geometry, texture set and monster types count. Changes for the PlayStation port were authored by Tim Heydelaar.[1] It uses the music track "Creeping Brutality" by Aubrey Hodges (during the demo playback, however, the music track is "Credits & Demo", also by Aubrey Hodges). 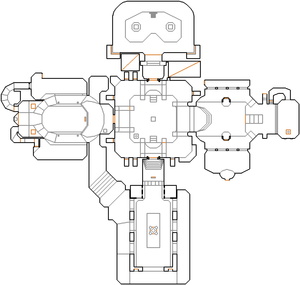 Map of Baron's Lair
Letters in italics refer to marked spots on the map. Sector, thing, and linedef numbers in boldface are secrets which count toward the end-of-level tally.

Go to the western door, open it and kill the revenants across the pit (some of them will teleport across to you). Go down the stairs and press the switch in the sludge pit, which will cause the north and south walls to lower revealing arachnotrons; kill these quickly before you are caught in their crossfire. There is a door in the northern area with a switch opposite it; press the switch to open this door.

Back in the starting area, open the north door to find a room with a pit and many barrels. You will need to destroy some of the barrels which will cause imps, demons and nightmare spectres to teleport in depending on skill level. Once they are dealt with, destroy the barrels in the pit blocking the blue skull key and pick it up.

Return to the starting are and open the south door. Press the switch behind this door to lower the wall and reveal a room with demons and revenants - kill them all and go to the south wall of this area. There are two switches behind the pillars here - one switch opens the door you came in through, while the other switch opens the large east door in the starting area.

Go to the starting area and head through the east door, then go straight ahead and up the stairs. At the top of the staircase, turn left and press the switch in front of you to open a door in the lower area and release some revenants. Press the switch behind these revenants to open another door to the south, releasing several revenants and demons. Once they are dead, press the switch they were guarding to lower the marble platforms in the center of this area - each platform has a switch hidden behind it, and you must press both to open the doors to the exit teleporter.

Once both switches are pressed, go back up the staircase and through the door on your left. Follow the short passage to the exit teleporter and step on it to finish the level.

A number of changes were made for PlayStation Final Doom compared with the original PC level.

* The vertex count without the effect of node building is 1010.

Like the original PC level, this level does not include any barons of Hell despite its name.

A demo of this level is played if the player does nothing at the title screen. The demo ends with the player being killed by an arachnotron in the western area.