MAP28: Beyond the Sea is the twenty-eighth map of Hell Revealed II. It was designed by Andy Olivera and uses the music track "The Pyramid," by Petter Mårtensen (Thyrbse).

This map was actually MAP06 of Olivera's 1998 PWAD called D2200EP1. He decided to reuse it to get the Hell Revealed II project across the finish line, several years after the project had begun. 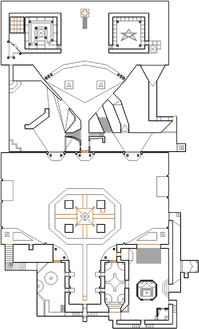 Map of Beyond The Sea
Letters in italics refer to marked spots on the map. Sector, thing, and linedef numbers in boldface are secrets which count toward the end-of-level tally.

You will start on a walkway that rings around four switches. These switches will come into play later on in the map. For now, grab the shotgun and the ammo and drop into the water, Head into either door leading into the southern part of the level and work your way to the southeast courtyard. Open the door in the southeast corner to find a baron of Hell (look out for the arch-vile behind you) and a switch. This switch raises some steps to the hall on the eastern side of the courtyard. Kill the chaingunners in this hall and press the switch at the end. As you go back, watch out for mancubi to your left. Make your way to the southwestern part of the map, where there will be new openings available. Climb the steps to the north up, where there is a switch which will raise a bridge to one of the switches in the ring. Go to the ring and press that switch, watching out for arch-viles that appear on the chaingunner platforms as well as the cyberdemon.

Now return to the southeastern part of the map and kill the arch-vile here. Head into the newly-opened building and press the switch inside (being careful of revenants). This switch raises a large set of stairs behind the building, leading to another switch. This one raises a bridge to the eastern switch in the ring. Go back to the ring and press that switch, looking out for arch-viles and another cyberdemon.

After pressing that, go through the door to the northern part of the level. Here you will have to contend with a vast army of monsters, so get to it. When you are ready, head up the steep steps leading to the left. Going northwest, you will head through a corridor and jump out to a switch. Press it, and get rid of any following enemies that will awaken in the previous area. Now climb up the steep steps leading to the right side of this area. Head for the western end of this high ledge to find Hell knights and a switch to flip. This switch reveals another one directly to the east, so hit that one to raise the northern bridge of the ring. Again, head back to the ring and press the northern switch, repeating against the arch-viles and cyberdemon.

Head back to the northern part of the map and go to where there are two buildings. The one on the right is now open, so climb the stairs up to the switch at the top (there will be revenants teleporting into the pentagram in the center of the building when you make it outside). This will raise the southern bridge in the ring. At this point, you should know what to do. Afterwards, go back to the northern area and up the steps to the eastern high ledge. An opening on the far right has some chaingunners and a switch. Flipping this switch sics monsters around the northern area so kill them, then go into the building on the left of two buildings. Kill the chaingunners and cacodemons, and then ascend the steps to a switch. This final switch raises up some steep steps in the north center, leading to the exit teleporter.

* The vertex count without the effect of node building is 1430.