MAP28: Buried Eons is the twenty-eighth map of Doom 2 Unleashed. It was designed by jerrysheppy and uses the music track "Sinister" by Robert Prince.

When using the music WAD included with this megawad, this level instead uses the music track "Dingo's Dream" by Kristian Aro. 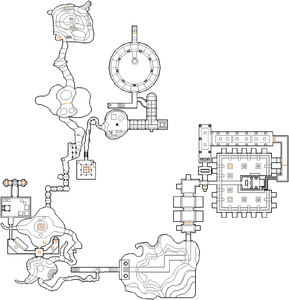 Map of Buried Eons
Letters in italics refer to marked spots on the map. Sector, thing, and linedef numbers in boldface are secrets which count toward the end-of-level tally.

Take the items in front of you and kill two imps, then climb the steps and go round the marble demon face to find a chaingun. Ahead is a bridge over a lava pit which is overlooked by several cacodemons - step on to the bridge then turn left to step down to a walkway which you can follow round to a tunnel. Enter the tunnel and follow it to a wide marble hallway, go round the corner and note the two gray walls on your left - as you pass them they will lower to reveal four Hell knights and various supplies. Continue following the hallway round another corner to see a stone passage ahead - when you step into it you will see an arch-vile teleport in ahead along with various other monsters including imps, shotgun guys and some revenants.

Kill all the monsters then go to the end of the passage and turn left to see another arch-vile at the top of some marble steps. Kill it and go up the steps then go left or right around the gray wall in front of you, watching out for three revenants that are revealed as you pass. You will come to a satyr switch next to a set of bars - press it to open the bars then step across to collect a BFG9000 and two energy cell packs, watching out for the baron of Hell that is revealed in front of you. Head west and go round the corner to see a hallway with three marble arches leading to a door - collect the berserk pack and megaarmor under the first two arches but use caution when you pass under the third arch, as the door ahead will open to reveal a cyberdemon and closets containing 48 imps will open behind you. Let the cyberdemon kill the imps for you, then finish it off and head through the door to a rocky cavern.

The cavern contains a marble bridge over a blood pool, which leads to another cyberdemon at the top of some steps; there are also cacodemons hiding behind the bloodfalls ahead and imps on a ledge in the south-west corner, as well as more monsters that teleport on to the bridge when you enter the cavern. Get the monsters to infight as much as possible, then deal with the survivors before crossing the bridge and climbing up the steps to a dark passage. Head forward until you reach some burning barrels then turn left to enter a narrow tunnel which you can follow past some lost souls until you drop into a wider tunnel with a berserk pack. Go round the corner to kill a shotgun guy, then take the box of shotgun shells behind it and turn right to see a cavern with a number of spectres.

After killing the spectres, go into the cavern and turn left to see a set of steps leading up - turn left again to kill some imps waiting in a small chamber, then climb the steps to the top and look through the hole in the wall here to kill some approaching spectres. Go forward and collect the armor if needed, then continue on to a cavern with a blood river and step over a small platform to reach the central column. Look round the column and kill the spectres waiting on the north bank, then step across and go into a narrow tunnel with wooden supports - follow the tunnel past some imps and spectres until you reach the end, then turn left to kill an arch-vile guarding a rocket launcher. After leaving the tunnel and entering a rocky passage, head north past two imps to a skull switch in front of a red platform and press it to drop down to the floor below.

Continue following the passage north and kill five demons that block the way, then head forward to a white cavern with ammo and medikits. When you are halfway across the cavern the walls will open and reveal a large number of imps, zombies and cacodemons on both sides - go back into the stone passage to kill them, then head through the cavern to a staircase and climb it to the top, passing two knights on the way. At the top of the stairs you will reach a larger cavern with several imps and cacodemons, along with an arch-vile - use the crate in the middle of the cavern as cover from the arch-vile, then climb up the marble structure to reach the red skull key sitting on top of it.

Taking the red key will cause eight revenants to teleport on to a ledge by the north-west wall of the cavern - you can use the caved-in tunnel in the north-east corner as cover while fighting them. Climb the stairs by the south wall up to a teleporter and step into it to reach a new area, then step off the pad to open the door in front of you and reveal a plasma gun. Turn right and head into a storage room with a mancubus and three chaingunners, then look in the north-west corner to find a set of red bars blocking a switch. Press use on the bars to open them, flip the switch and be ready to fight a large number of imps that teleport into the fenced area behind you. Use the megasphere, boxes of rockets and energy cell packs in the nearby crates to help you here.

Leave the storage room by the south exit and step over a gap in the floor to enter a narrow marble passage - you will be able to see an arch-vile teleporting in and out repeatedly, so time your shots to kill it as quickly as possible. Step out of the passage and kill the imps and shotgun guys that are revealed on either side of you, then follow the passage back to the cavern over the blood river to find that the central column has lowered to reveal a cyberdemon. Kill it then step on the marble floor it was standing on to be teleported to a new area guarded by four knights. Kill them and take the ammo pickups dotted around the room, then head north down the stairs and kill the imps in the passage ahead. Go to the end of the passage and head down the curved staircase past more imps, watching out for four cacodemons that appear in the shaft next to you.

Use caution when you reach the bottom of the staircase - there is a cyberdemon waiting in a large box on the right. Run straight forward past the cyberdemon into an arched tunnel, and a large number of monsters (including two arch-viles) will teleport in ahead of you; try and lure them into fighting with the cyberdemon if possible. Kill any surviving monsters then go back into the tunnel and turn left to confront three barons, before going into a small passage on the left leading to a large circular water pool. Take the supercharge in the pool if you need it, then climb the steps around the pool to the top and take the partial invisibility sitting on a marble plinth.

Taking the artifact will cause a cyberdemon to teleport on to the step directly north of you, and a number of knights will appear on the other steps surrounding the pool. The partial invisibility can make their projectiles harder to avoid, so drop into the water and head south into the dark passage to avoid being surrounded. Once all the monsters are dead, return to the top of the staircase and head through the north wall that opened when you took the invisibility - the passage behind it is the level exit.

When you enter the cavern with the second cyberdemon, head due west until you pass a bloodfall. There is a niche in front of you which contains a supercharge, a plasma gun and three energy cell packs.

Just before the cavern over the blood river, you will pass through a marble passage where monsters can teleport in and out repeatedly. In this passage, head east to find a super shotgun being guarded by a knight.

In the red key cavern you can see three boxes by the east wall, one of which holds a megaarmor. You can reach it by climbing on the northern box which contains brown dirt.

When you enter the passage leading to the circular water room, turn left and climb the stairs to find a BFG9000 and an energy cell pack.

This level has two player 3 starts (Things 925 and 926) but no player 4 start, so cooperative play is only possible with a maximum of three players. When three players are present, the extra start point will become a voodoo doll.

* The vertex count without the effect of node building is 4594.