MAP28: Castle Agony is the twenty-eighth map of Project Einherjar, and the finale of The Scourge of Mordin. It was designed by Mike MacDee (Impie) and uses the music track "". 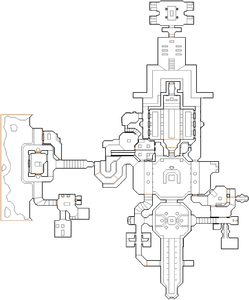 Map of Castle Agony
Letters in italics refer to marked spots on the map. Sector, thing, and linedef numbers in boldface are secrets which count toward the end-of-level tally.

Contessa's castle is divided into the north, east, and west wings, all three of which converge into the main hall with the horseshoe dining table. Behind the fireplace is the red door to the White Lady's oratory.

The west wing is mostly hidden initially: you can only access the hall of rooms that open when you climb the stairs to the door switch on the west balcony. The switch opens one of the rooms in the main hall, where you'll find the yellow key. Take it up the east wing stairs and inspect the Valkyrie banner to open the first of a series of sealed doors (and hidden ambushes), eventually leading through the yellow door and into the north wing.

Go past the sealed door and up the stairs to the altar: follow the green strobes to the switch, which opens the sealed door. Behind this door is a switch that lowers the main hall's balconies, revealing a massive ambush and the rest of the west wing. Kill absolutely everything before proceeding.

The west wing is mostly a dungeon filled with Juggernaut traps. A staircase leads to the blue key, and a silver door to a switch that opens the two sealed gray doors: one in the main hall, the other at the opposite side of the dungeon. Through the latter is a heavily guarded bastion, another dungeon, and the red key.

When you approach the pulpit, the door seals behind you, and Contessa comes out to play, wielding dual Purger cannons, trigger happy tendencies, and little to no regard for the loyal cultists around her. The fight is chaotic due to her habit of dodging left or right and unloading her weapons whenever she is damaged; the pillars and cultists cluttering the arena make a tough fight even more difficult. The ballistic knife will make short work of her, provided you have accumulated several blades by this point. When she dies, the exit door opens behind the pulpit.