MAP28: Corporate Hell is the twenty-eighth level of Memento Mori II. It was designed by Stephen Watson and uses the music track "Circle of Fire" by David "Tolwyn" Shaw. It contains a separate area for multiplayer competition, and is the largest level in the megawad.

Mission Objective: Reach the top of the UAC corporate tower and secure the area by destroying all Hellspawn.

Initial Scout Report: Before contact was lost with the four scouts sent in to perform preliminary recognaissance, [sic] they managed to send the following information:

The UAC corporate compound is split up into two areas: A product testing facility and the corporate arcology super towers.

A short-distance localized Teleporter Pad was set up by a scout in the product testing sector and that is where you will start the mission. Primary mission objectives here will be threefold: (1) clear the area of the hellspawn infestation, (2) acquire a security key that will allow entry into the corporate arcology super towers, and (3) locate and activate the switch that will open access to the teleporter pad that will take you to the coporate arcology sector.

Strategy: Watch your back, Marine. You will be exposed from all sides in this area. Just keep moving and let the monsters take each other out. Conserve your ammo, scouts report you will need it in the next area...

The Corporate Arcology is a collection of five towers and three skyscrapers. Your Primary Mission objectives here will be: (1) gain access to the highest floors by progressively hitting various security switches in the four 'satelitte' [sic] towers, (2) clear the area of Hellspawn, (3) once on the highest floor, take the teleporter to clear out the final West building to finish the mission.

Scouts reported that each of the four towers attached off of the central tower house a Security Switch will allow the central elevator to reach the next higher level. The path to each of these towers is marked by a blue square which switches to black once you have come into proximity of a Security Switch. You may use this as a marker to tell where you have already been. Once in a 'satellite' tower, remember to check carefully for the Security Switch and to hit it. Otherwise you will waste valuable time backtracking. These Security Switches are recognizable by their proximity to a short techlamp.

The South building houses a security key that may be used in the West building to resupply yourself if necessary.

Be careful in this sector, as there are several nasty ambushes that have been devised by the more 'corporate minded' Hellspawn. Don't waste your ammo.

Scouts marked key areas with Florescent Arrows. Look for them, they provide clues to pressure pads that activate lifts, or may contain caches of Ammo and Medical supplies. 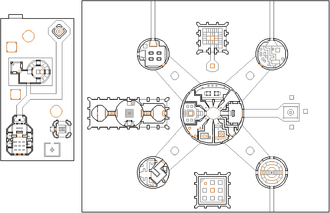 Map of Corporate Hell, cropped to only show the playable area
Letters in italics refer to marked spots on the map. Sector, thing, and linedef numbers in boldface are secrets which count toward the end-of-level tally.

Enter the south-western building from the north, in the main room follow the arrow to the right, activate the skull on the backside of the table to reveal the yellow key you will need after teleporting.

In the north-western building, push the red switch at the window to raise the stairs to the right. Go to the top and use the red switch on the pillar's backside to open the teleport.

Enter the teleport in the north-eastern tower from the back.

Go through the yellow door, lower the lift and ride up. You are now on the first floor with four ways to go. In each of them, you will have to enter a tower and flip a switch. Each switch will increase the lift's top floor, each time giving access to another additional direction: A blue tiled computer room in the south (slightly west), a room with a gray box in the south (slightly east), a room with the red keycard in the north, and finally a room with a fountain in the west. Switches near the lift will lower it, you will have to make sure to get off at the desired floor level, or jump down from above. Sometimes, the lift will not raise up fully when a monster gets stuck. You will have to visit the four towers, all from the first floor that the lift will not stop at after the first lift switch is activated!

In the south-eastern tower, you will be trapped until you use the skull switch on the central pillar' backside. On the other side is the lift switch.

In the south-western tower, the bridge will lower after you passed over it. On the right side, there is the lift switch, but also a trigger releasing many monsters. Now, you can reach a switch on the other side of the room to restore the bridge.

In the north-western tower, walk over the glowing line of light behind the arrow, a lift to the right lowers, on the top jump over to the red lift switch.

In the north-eastern tower, walk onto the little box on the left, lowering the bigger one behind. Jump over to the other boxes, hit the switch, another box to the right has lowered. Ride it up to the top, and before going any further, look out for a switch in glowing light on the right side of the boxes in front of you. Slowly jump down where you spotted the switch, use it, a big box behind you has lowered that will get you to the green lift switch on the Hell knight floor.

On the floor that becomes available after the third lift switch, get the red keycard in the north.

Now ride up to the top floor and go west. On the other side of the fountain is a switch to lower it, enter the teleport to the exit room. You can always teleport back if you like. Enter the room to the left, open the red lock bars and use the green switch to open the exit door in the other room. 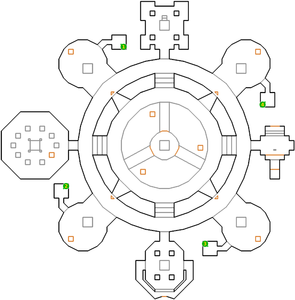 * The vertex count without the effect of node building is 3038.