MAP28: Dark Master is the twenty-eighth map of 2048 Unleashed. It was designed by Memfis and uses a MIDI rendition of the music track "Something I Can Never Have" by Nine Inch Nails. 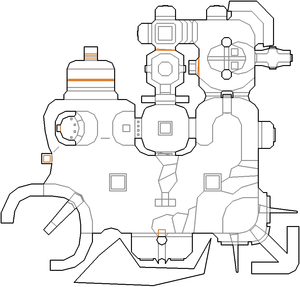 Map of Dark Master
Letters in italics refer to marked spots on the map. Sector, thing, and linedef numbers in boldface are secrets which count toward the end-of-level tally.

As the level starts you will face monsters on all sides, including a large group of imps below you to the south-west, but they are all facing away from you so avoid firing weapons until you reach cover. Head straight forward to collect a backpack, megaarmor and super shotgun then turn right and go through a silver doorway to reach a walkway guarded by a group of imps (you will have to kill them to get past) followed by a revenant and an arachnotron. At the end of the walkway you will find another revenant standing on a teleporter - step on the teleporter to reach the north-east corner of the level, ready to kill an arch-vile and revenant that appear in front of you as you step off.

Turn left and climb some green steps to confront an arachnotron and an arch-vile then turn left again to face a mancubus which is guarding the yellow keycard. After taking the key, head forward and drop into the room that held the super shotgun then turn right to go through a second doorway with a rocket launcher behind it - if you straferun west you will be able to jump across to a ledge with a supercharge, where a mancubus guards a gargoyle switch that requires the yellow key. Pressing the switch will open a wall to the north revealing cacodemons and imps, and three revenants will teleport in near the doorway you just stepped through. Once the area is clear, run north past the wall you just lowered to collect a waiting BFG9000.

Collecting the BFG will raise the blood pit behind you, and lower two wooden columns containing the blue and red keycards - these will be defended by two arch-viles, two revenants and a cyberdemon so use the BFG to kill them. After collecting both keycards, return to where you found the BFG and open the marble wall behind it to reveal the exit teleporter.