MAP28: Eviscer-station is the twenty-eighth map of 10 Sectors. It was designed by Lee Szymanski and uses the music track " ". 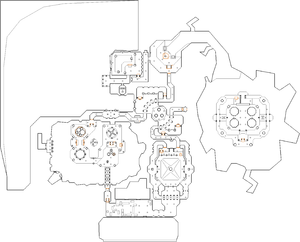 Map of Eviscer-station
Letters in italics refer to marked spots on the map. Sector numbers in boldface are secrets which count toward the end-of-level tally.

Proceed into the big room up ahead, getting supplies when necessary, then head up the next lift. In the next hall, make note of the super shotgun behind red bars, and head into the next big room. Drop down and grab a radiation suit, then head across the nukage to a big structure in the eastern part of the map. You will see the red key on this structure, and the entrance is straight ahead, so go in. Follow the path to a lift, then take it up and head all the way around to the key.

Now backtrack through the nukage to the previous room, taking the lifts back up. Grab the super shotgun and then open the big red door. Follow this hall, hoping across the blocks (if you fall, use the lifts to get back). Keep going through the hall, killing monsters and picking up the megaarmor. After the next red door will be a big area, where the blue key is in the center of the building. Take it, and take a lift up. From here, take the walkway around to another lift, and then go across the blocks to the blue door.

Open the blue door and go down into the crate room (note that you can actually shoot through the crates here). Head through this area to the next big room, then use the lifts to the north to reach the top. Open the door and follow this path as it meanders around and above the blocks you passed before. The path will eventually lead to the exit.

At the start of the map, head through the cross-shaped wall for a secret room with the message saying "QUAKE SUCKS" as well as a shotgun and some shells.

In the red key structure, taking the central lift lets you go up to a rocket launcher. There is also a berserk pack and a radiation suit here, which can come in handy as you will have to backtrack across the nukage after getting the red key.

In the big area with the blue key, a plasma gun is across the nukage to the west. 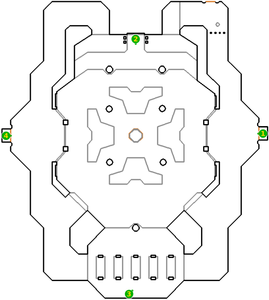 * The vertex count without the effect of node building is 6078.