MAP28: Excavations is the twenty-eighth level of Icarus: Alien Vanguard. It was designed by Steven Phares, and uses the music track "FastTrack" by Tom Mustaine. It is notorious as the hardest level in the megawad, due to an incredible shortage of ammo in proportion to the amount of enemies. 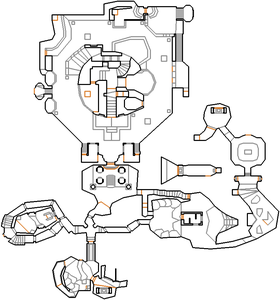 Map of Excavations
Letters in italics refer to marked spots on the map. Sector numbers in boldface are secrets which count toward the end-of-level tally.

A zombie will be behind you at the start. Kill him and head to the next area and press the switch. Go up the rocks nearby and press the switch that appears here to lower the wall into the mineshaft. When you reach the four-way intersection, go west, taking either path to the switch. Press it to lower yourself to a baron of Hell and the yellow skull key. The wall behind you will rise up, so in order to leave, step on the throne where the yellow key was at. Return to the intersection and head north towards a temple. Look out for chaingunners when you approach the entry door. Enter it to find the blue key. To get it, first head into the two wooden side rooms you see and flip the two switches in them. Then, go left of the building towards the ledges with revenants. Enter the opening to find a third switch. Flip it and enter the main building via the nearby stairs. Head down the next set of stairs and go up the stairs leading south to the blue key, but be very quick as exploding barrels will teleport near it once you grab it. Also look out for the many enemies that will teleport into the area. When that is done, go back to the four-way intersection and head east. In the open area, look our for pain elementals and lost souls, and head into the shack to obtain the red skull key. From there, head for the path southeast and traverse the blocks over lava carefully, as there is no way out if you fall. On the other side, open the blue and yellow doors and hit the switches behind them to open the barriers northward. Press the switch behind the BFG9000 to get it, then enter the teleporter at the end and press on the furthest panel on the right to leave the level.

The data was last verified in its entirety on April 6, 2015.

* The vertex count without the effect of node building is 1650.

"I play tested the level until I was completely confident that you pretty much only had enough ammo in the level to half whatever supplies a standard player had leftover from map 27.

The concept was more along the lines of removal of any significant gain made by the player up to that point in the game. Hence the name, Excavations. The setting of the map reflected this concept. I never really made this public to the rest of the team at that time, it was more of a private joke. I was constantly told by the others on the team that there wasn't enough ammunition in the level, and against my wishes, my father eventually doubled the amount on the map before release, to my cries of, 'screw em, real men punch shit to death!'"