MAP28: Fetals' Remains is the twenty-eighth map of Requiem. It was designed by Anthony Czerwonka, and uses the music track "Breath of Sin" by David Shaw.

You're casted into another strange environment, you're mission [sic]: To find the Red Skull and place it back onto the Alter [sic] to reveal the passage way out [sic]... Very well protected, though... you must not fail, you have gone too far to quit now! 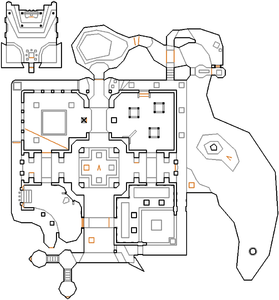 Map of Fetals' Remains
Letters in italics refer to marked spots on the map. Sector numbers in boldface are secrets which count toward the end-of-level tally.

Check the torch behind you to raise some stairs up to the hall. Now follow this hall all the way east and then north. When you see a path branching north across a bridge, take this path up and around, opening the door and obtaining the blue keycard. Head back to the hallway and notice the opening to the east. Enter this room and cross the walkway to the next room. You can jump down and get the rocket launcher from here. Otherwise, take the blue door on the walkway leading west. Behind the blue door is a room with Hell knights and a barred stairway up to the ledge. Note the green symbols around the bars, then head north into the next room. There will be arachnotrons in here, and the walls reveal more of the ledge as well as some barons of Hell. Go towards the pillar on the east side of the room, close to the water, and look for the green symbol on the east side of the column. Press on this symbol and then return to the previous room to find the bars are now open. Head onto the ledge and head left first, to the end where there is a brown switch on the wall. Press it then move all the way up through the ledge until you drop down into the water. You will find an opening to the north with a pain elemental in front of the waterfall. Drop down into the deep water and wade across to the east, back to the area where you got the blue key. The bridge will lower, so go across it back into the water, turning right and grabbing the radiation suit just before the nukage. Grab the red key that is sitting on the rock there and take the teleporter to the southwest. You will be in the center of the map, and will lower revealing revenants and demons. Step on the lit pad to be teleported to another area. Go up to the altar and use it to place the red skull key on it, then turn around and exit to the south. 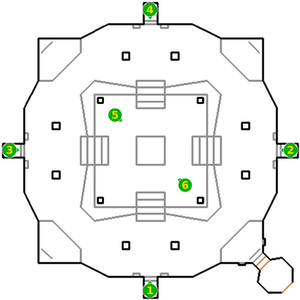