MAP28: Fraud is the twenty-eighth map of Unholy Realms. It was designed by Brian Knox (Snakes) and uses the music track "Out of Darkness," composed by John Weekley (PRIMEVAL). 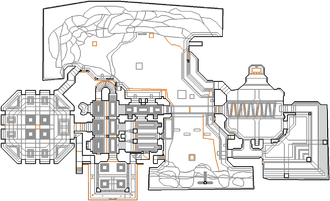 Map of Fraud
Letters in italics refer to marked spots on the map. Sector numbers in boldface are secrets which count toward the end-of-level tally.

Two chaingunners (things 416 and 417) and two imps (things 418 and 419) do not teleport into the map. This is because the closet they are in is not connected to any other sector or closet, meaning they do not hear any noise and do not come into the main map.

* The vertex count without the effect of node building is 3716.