MAP28: Good Times is the twenty-eighth map of 32 in 24, a deathmatch megawad. It was designed by Nautilus and uses the music track "".

It was the author's second map for the project, following Stair City. Overall it was the thirty-second map to be submitted, arriving between 11 and 21 minutes before the 24-hour mark. At this point, the first 32in24 project could now be deemed as a success, having gathered a total of 32 maps within a 24 hour period. More maps continued to arrive in the short time that remained, and to keep the final WAD at 32 maps, several maps were cut during compilation. 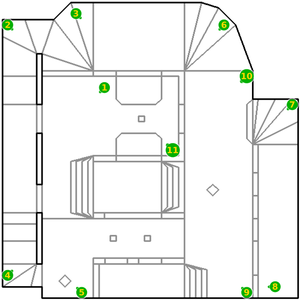 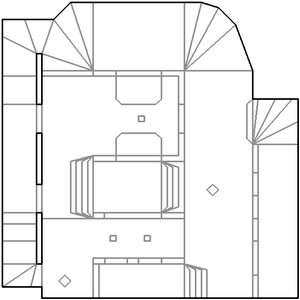 Good Times is a small level that fits within a square of only 1663x1663 map units. It consists of small buildings at the north, south and centre of the map, plus a hallway connecting to the north building running along the western edge, and a separate hallway along the eastern edge. The space in between has been flooded with water. The building are all elevated, but steps leading up to them are available on both sides for the north and central buildings, though the steps for the southern building are only on its east side. It is also possible to run from one building to the next via small platforms sticking up out of the water.

In the flooded parts, a rocket launcher can be found in the south-west corner, and a super shotgun is just to the east of the central building. These weapons are placed atop short diamond-shaped plinths.

Another super shotgun can be found in the west hallway. A rocket launcher is in the north building, and the plasma rifle can be obtained from the central building. The eastern hallway is entered from its north end. If players travel to the other end at the south-east corner of the map, they will obtain the BFG. Just across from the BFG are the steps allowing access to the southern building, which contains a green armor and an energy cell pack, amongst some other supplies.

* The vertex count without the effect of node building is 157.