MAP28: Halls of Pain is the twenty-eighth map of Plutonia 1024: The Plutinya Experiment. It was designed by Surreily and uses the music track "The Healer Stalks", originally composed by Robert Prince for Doom II. The par time defined in MAPINFO is 7:00. 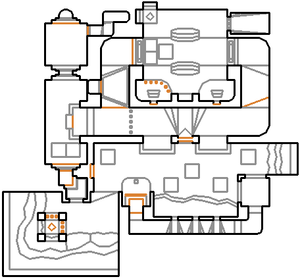 Map of Halls of Pain
Letters in italics refer to marked spots on the map. Sector, thing, and linedef numbers in boldface are secrets which count toward the end-of-level tally.

Step across the blood river in front of you to get an armor and shotgun, then flip the switch in the south-east corner to lower a barrier behind you. Enter the blood and go through this barrier to find a chaingun, then head round the corner to find a super shotgun that is guarded by a spectre as well as shotgun guys, chaingunners and zombiemen. Press the eye switch on the south wall to lower the lifts on either side, which hold two Hell knights (and two more revenants on Hurt Me Plenty (HMP) skill level or higher), then ride either lift up to a courtyard with demons and more revenants. Go to the east side to find a backpack, then follow the tunnel here south and west to a lift leading up to the red keycard. Taking the red key will cause chaingunners to teleport in, along with lost souls on HMP and revenants and shotgun guys on Ultra-Violence and Nightmare.

Press the eye switch in the courtyard to lower the lifts again, ready to confront two revenants (as well as four imps and two pain elementals on HMP or higher) that teleport to the blood river, then fight your way back to the starting area and go up the south steps, open the red bars and flip the switch behind them to lower a second barrier behind you. Behind this barrier is a rocket launcher; after taking it, immediately turn left to slay one to three arch-viles that block your path then follow the hallway to a junction and turn right to see a lift with an invulnerability on it. Flip the switch behind the powerup to go down to a room full of knights, demons and arch-viles and quickly blast all of them, then head north into the neighboring room to find a BFG9000 and the blue keycard. Taking the key will cause more revenants to teleport in to the previous room - kill them, then activate the lift at the south end and dispose of a waiting arch-vile before riding it up to confront some zombies. Head outside to slay a few final chaingunners before opening the blue bars to reach the exit teleporter.