MAP28: Hard Target is the twenty-eighth map of Kama Sutra. It was designed by Jakub Razák and uses a MIDI rendition of "Holier Than Thou", originally by Metallica.

Method wanted one map which would be very hard, inspirated [sic] by HR24 and have more than 1000 monsters so I gave him a free hand. And.. it has over 1700 monsters at the end. Crazy map :) 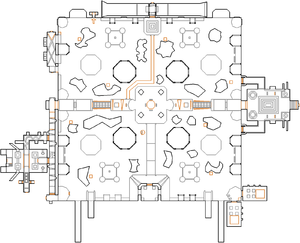 Map of Hard Target
Letters in italics refer to marked spots on the map. Sector, thing, and linedef numbers in boldface are secrets which count toward the end-of-level tally.

Although this map may look and feel like HR24, it is substantially easier, the most striking difference being the start. Here you have a safe isolated position, with plenty of supplies to begin with. Once outside, you will be swarmed by hordes of cacodemons. You may notice three cyberdemons in the vicinity - to the left, to the right, and one directly ahead; trick them into attacking your position so that their rockets will thin out the cacodemons. Mop up remaining resistance and jump down into the slime.

All stationary and caged monsters on lower levels can be largely ignored, if your footwork is sufficient enough. You may want to take arch-viles out, however. The slime is less damaging than it was on HR24, and there are hefty 52 radiation suits on the map, but use them sparingly if you are going for maxkills - it is easy to run out of protection while doing that rather tedious task.

The exit lies directly ahead of you - your goal is to raise the bridge. There are two identical pathways protruding from the west and east walls of the map, each containing a switch. Find the door, fight your way through and ride the elevator to the top, but be warned - you will be greeted by a mob of Hell knights, a cyberdemon, and dozens of cacodemons and pain elementals will be released when you get to each button. The eastern switch platform is more difficult of the two - there are more monsters and not much supplies, so you may end up low on health and mobbed by flying demons with no chance of escaping - try to retreat in advance.

Having raised two parts of the bridge, head to the elevator in the northwestern corner and flip the switch in there. This will raise a narrow walkway connecting the western switch platform and a door in the north. The spider mastermind residing there probably will be dead by now. Open the door and operate the switch, raising the third part of the exit bridge, teleporting a cyberdemon in front of you, and - again - hordes of cacodemons. It may be useful to grab an invulnerability before going up there, and then try to provoke infights between the cyber and cacos, escaping the commotion at the same time.

You can leave the level now - return to the start and cross the bridge to the central cage.

There is an arrow on the floor pointing to the northern wall in the northwestern corner. Step on it to reveal two teleporters, leading to two high platforms with cyberdemons - you will telefrag them - and BFG9000s. You can then straferun from the eastern one to secret #2 - if the bars are lowered (see below).

Not far away from those two teleporters is another one close to the western wall. It will take you to the platform with a switch near the start - it will lower the bars allowing access to secret #2.

* The vertex count without the effect of node building is 2756.