MAP28: Heck is the twenty-eighth map of TNT: Evilution. It was designed by Milo Casali and uses the music track "AimShootKill" by Tom Mustaine[1]. In the PlayStation port it is the twenty-fourth level and uses the music track "Twisted Beyond Reason". The level's architecture and texture themes pay homage to parts of MAP18: The Courtyard and MAP28: The Spirit World from Doom II. 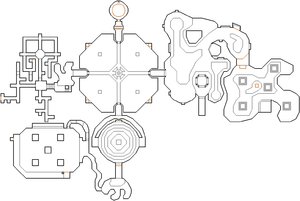 Map of Heck
Letters in italics refer to marked spots on the map. Sector numbers in boldface are secrets which count toward the end-of-level tally.

There are three keys in the level and you can get them in any order, at any time.

In the starting area, take the southern alcove (you will see it at the beginning of the level). Grab the combat armor if you wish and take either walkway. You will encounter an arch-vile and some lost souls. First, kill the arch-vile, then press the switch. This switch lowers both the platform where the arch-vile was and the baron art wall. Head into this wall while it is temporarily open. In the cave, turn right and proceed down the tunnel marked with wooden bars. Turn left and use the lift to find yourself inside the cage. Proceed straight and take the red skull key. Now, if you want, you may fight a crowd of various demons and revenants. In any case, backtrack to the beginning where you started this level.

In the starting area, take the eastern alcove. You find yourself in the cave (which is similar to one in Doom II's MAP28: The Spirit World). Proceed all the way northeastward, then drop down into the tall area to the south. Simply grab the key. Many traps will open in this area. Battling monsters is optional. All other items here are optional. Backtrack to the starting area.

In the starting area, take the western alcove. Turn left and climb the stairs. Go down the other stairs here. You now find yourself within the maze. Remember this fork as you need to return here later. Take the straight way (west). Turn left, then right. Press on the skull switch (this will open the other parts of the maze). Backtrack to that fork, the entrance of the maze. Now, take the way north which was formerly closed. There, turn left (west) and left again (to the south). At the end of the way, grab the blue key. Beware of the arch-vile. Other corners of the maze are optional. Backtrack to the starting area.

When all the keys are collected, take the northern alcove in the starting area. Open all of the doors, each of which requires a respective key. Kill the lost souls if you want. Jump into the large pit to end this level.

You can exploit the lost soul limit on this level by first heading to the eastern portion of the level, instead of the south, which reminds of the cave in the Doom II's The Spirit World. There are at least three pain elementals in the yellow key area and they will be unable to issue any lost soul because there are already 33 lost souls on the level, so this limit will be met.