MAP28: High-Tech Hades is the twenty-eighth map of Perdition's Gate. It was designed by Jimmy Sieben (Evil Genius). 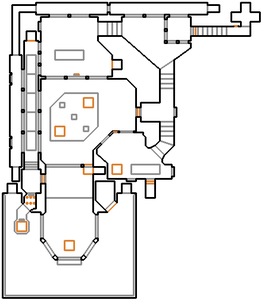 Map of High-Tech Hades
Letters in italics refer to marked spots on the map. Sector, thing, and linedef numbers in boldface are secrets which count toward the end-of-level tally.

At the start, go forward and turn right. Flip the switch to the right to raise stairs then open the door to the west. Ahead you see an intersection. Turn left and go straight to a room with computer terminals, then press the switch on the north side of this room. Return to the intersection and this time go to the west. You'll arrive at another room with computer terminals, use the switch on the south side of this room then enter the teleporter to your left. Collect both keys, then enter the northern teleporter from its west side. Go forward, then open the yellow and blue bars and enter the exit teleporter.