MAP28: Hotash Slay is the twenty-eighth map of NDCP. It was designed by Steve Robinson (Stphrz) and uses the music track " ". 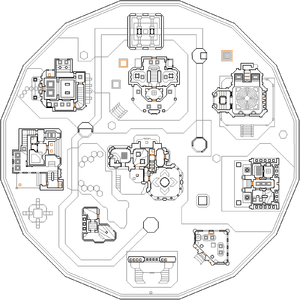 Map of Hotash Slay
Letters in italics refer to marked spots on the map. Sector, thing, and linedef numbers in boldface are secrets which count toward the end-of-level tally.

Given the nonlinear nature of this level, you can go just about anywhere. Just be sure you are prepared to fight anything both inside and outside of the buildings:

* The vertex count without the effect of node building is 5152.