MAP28: Judgement is the twenty-eighth map of Eviternity. It was designed by Joshua O'Sullivan (Dragonfly) and uses the music track "Temporal Tower," originally from Pokémon Mystery Dungeon: Explorers of Time/Darkness, sequenced to MIDI. The par time is 3:45. 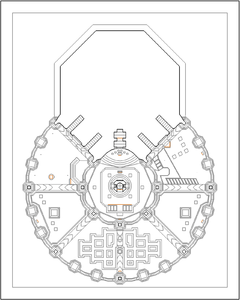 Map of Judgement
Letters in italics refer to marked spots on the map. Sector numbers in boldface are secrets which count toward the end-of-level tally.

You start off in a tower in a courtyard, facing south. Step out of the tower and loop back around to the north, to find goodies on top of gold columns, and a switch. The doorway behind these is the exit, blocked by a gold pillar. For now, press the switch to lower the columns, and also the walls to the northeast and northwest. Behind the walls are monsters, so be ready. In the distance, two pillars with cyberdemons (mancubi on easier skills) will also rise up, so watch out for that.

The NE and NW areas each need to be cleared to continue, but you can do them in either order.

Just past the gate wall is a drop down to water. Turn south (left) and you'll see a blue skull key on a stone dais. Watch out for fire from the pillar monster. Grab the key. As you might expect, monsters will begin warping in. After about 20 seconds, the water will rise, and you'll be able to return to the central courtyard.

Initially this will be a wide open area with a white marble floor. There is some ammo and health along the far wall, a green pillar with a supercharge on it (sadly out of reach for the moment), plus a switch block with a rocket launcher on top of it.

Press the switch, and most everything in the area -- floor included -- will drop down. Stairs will form along the back (west) walls, letting you get back up and out. You can get the rocket launcher now, and you'll also get enemies warping in all over the place. On higher skills that includes an arch-vile at the top of the stairs. Meanwhile, the gold skull key will warp in near the waterfall to the north. Grab that and fight your way out back to the central courtyard.

Once you have the blue and gold keys, the walls between the central courtyard and the southern area will lower. In the southern area there will be ammo scattered about, a megasphere, and a small-ish assortment of monsters. This area is very exposed to the big monsters on the pillars, so be prepared for the crossfire. The red key is in the middle of it all, on top of a gold column.

Due south is a switch block with a plasma rifle on top. Press the switch, and the block will lower, along with the walls at the sides of this area. Behind the walls are hordes of monsters. Moments later the gate walls to the central courtyard will raise up again, trapping you with the hordes. Meanwhile the large pillars with the big monsters will be slowly lowering, bring them down to ground level to join the fun. The column with the red key will slowly lower as well.

In the areas formerly holding the hordes and big monster pillars, two additional switch blocks can be found. One has a supercharge, the other the blue armor. You have to trip both switches to lower the gate walls again.

Returning to the central courtyard, you'll find a new block of switches has appeared to the north of the starting tower, one for each color key. Activate all three switches. After the third switch, the gold pillar blocking the exit doorway will begin to lower -- slowly. It's also very tall, so it takes a while. This gives the monsters that simultaneously begin teleporting in a chance to attack you.

The final monsters come in several waves, and at the highest skill level include a spider mastermind and a cyberdemon. You can fight or flee while waiting for the pillar to finish lowering. Once the doorway is clear, you can walk though, which triggers the exit.

* The vertex count without the effect of node building is 3647.