MAP28: Maelstrom is the twenty-eighth map of Sunlust. It was designed by Zachary Stephens (Ribbiks) and Daniel Jakobsson (dannebubinga), and uses the music track "Gate of the Ancients" from the game Stonekeep. 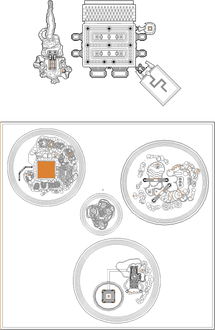 Map of Maelstrom
Letters in italics refer to marked spots on the map. Sector numbers in boldface are secrets which count toward the end-of-level tally.

This level has two exits. One is easily accessible (skipping much of the level) with the blue and yellow keys, but kills the player, forcing a pistol start of the next level. The other requires the player to get the red key and go through all of the level, but does not kill them.

* The vertex count without the effect of node building is 30046.

"[D:] The beast. Fuck me, this took me long to put together. This map has gone through the most changes in my mapping history. Phml can fill you in on how this map looked 3 years ago. I'm telling you it wasn't pretty. It feels like this map is the whole reason for all the mappers block I've suffered through since this project started. I actually think this started out as an entry for Slaughterfest or Combat Shock 3, but Ribbiks liked the aesthetics so I decided to pimp it up for Sunlust instead. 3 years later it looks nothing like the old drafts. Ribbiks made the north-eastern island by himself and the rest is more or less by me with some parts heavily tuned up by Ribbiks (like the big secret exit fight). I grew tired of drawing lighting gradient sectors, so Ribbiks fixed a lot of the gameplay tweaking to get a nice flow through out the map. And do I sense some LAG?!

[R:] What he said ^^. This map will likely be unplayably laggy when played on zdoom-derived ports, especially on lower end machines. Play on Gl-boom+ for best results!"
― sunlust_extra_info.txt