MAP28: Massacre is the twenty-eighth map of Hellcore. It was designed by Robert Babor (Fusion) and uses the music track "". 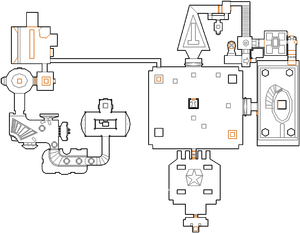 Map of Massacre
Letters in italics refer to marked spots on the map. Sector, thing, and linedef numbers in boldface are secrets which count toward the end-of-level tally.

This map is impossible to complete without the use of cheat codes. To progress, you are supposed to use the skull switch in the yellow key room, which will reveal a teleporter in the southeast part of the main courtyard. The teleporter in turn is supposed to take you back to the starting point, which is necessary to reach the yellow door and get the red key required for the red door in the courtyard. However, there is no teleport landing on the starting point itself, so the player is not able to teleport back.

Two arch-viles (Thing 231 and 234), which can be heard at the start of the map, are unable to enter the map proper due to being in a sector that does not have a teleport line.

* The vertex count without the effect of node building is 1629.