MAP28: Necrophobia is the twenty-eighth map of Community Chest. It was designed by Gene Bird, and was originally released standalone as part of his Blind Alley series. 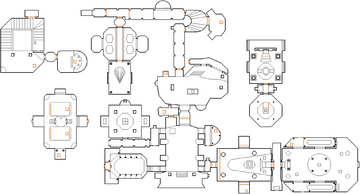 Map of Necrophobia
Letters in italics refer to marked spots on the map. Sector numbers in boldface are secrets which count toward the end-of-level tally.

Sector 151, the north portion of the blood pit in the east of the map, is not marked as a damaging floor, unlike sector 149, making up the rest of the blood pit. Thus, if you fall onto this sector before raising the bridge, you will not take any damage. In addition, you will be unable to escape, unless you use the noclip cheat.

Linedefs 826 and 827, making up the southern side of the second step of the staircase into the room before the yellow key area, are set as impassible for no apparent reason.