MAP28: No Room is the twenty-eighth map of Community Chest 2. It was designed by Andrew "Linguica" Stine, and uses the music track "Nobody Told Me About id" from Doom. 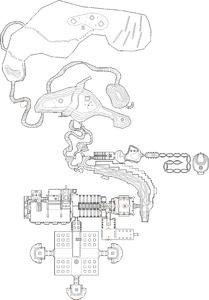 Map of No Room
Letters in italics refer to marked spots on the map. Sector, thing, and linedef numbers in boldface are secrets which count toward the end-of-level tally.

Grab the shotgun as you head through the door. Head up either staircase and drop down into the open area, watching out for two arch-viles in alcoves here. There is a rocket launcher in the middle of this room, grabbing it triggers cages with revenants. You will notice several face switches around this area. Press the one that is not lit to lower the pentagram barrier revealing three demons and a long passageway. Step on the stepping stones into the metal area and go along the passage killing spectres as you go. The switch at the end reveals more stepping stones for you to cross the lava river safely, but it also reveals more spectres and exposes you to the cacodemons. Go back and cross the newly formed stepping stones to cross the river (strangely enough, the lava is not damaging until a certain point, but the surrounding sides are damaging). When you reach a fork, your only choice is right as the left path is blocked off. You will be in a marble area with a switch that lowers the pentagram walls in the hallway and summons two barons. There is a revenant just behind the wall there.

Follow the cavern until you see an opening; as you approach it, guts will spill out of it. Go through this opening through the tunnels killing the arch-vile and imps as you go. You will go through a portal and come out in a yellowish organic room, likely falling into damaging nukage. Enter the teleporter, and you will end up finding a switch which lowers the bars barring the left access at the fork you were at earlier. When you head back, there is a closet with Hell knights now open, and a switch that raises an lift allowing you to backtrack. Now go back to that fork and the bars should be lowered for you to access a chaingun and the rest of the path. You will come across an arch-vile and two paths, the left becomes a dead end, so take the right path.

You will eventually find a large chamber with a large lava river separating two sides. On your side there is a small destroyed shack which houses the blue skull key if you are playing on the easy difficulty setting. To cross the river, you must jump to the lower end of the small staircase that is visible if you look downwards from your end. Time it carefully as there is no escaping the lava if you fall in. Once on the other side, there are two paths marked by candles. The right path eventually dead-ends at a soul sphere. Be careful if you want to get it, as there are pain elementals in a large lava cauldron and a pitfall right where the soul sphere is. If you fall in either, you cannot escape. The left path continues through until a very large lava-filled chamber. Follow the path as carefully as you can crossing the columns and avoiding charging lost souls until you reach ground floor. The blue skull key will appear here if you were playing on either Hurt Me Plenty or Ultra-Violence. Grabbing it (or actually just entering the shack) triggers a growl along with several Icon of Sin-like walls. Numerous monsters will spawn in depending on the difficulty. On Ultra-Violence, you will have to fight two cyberdemons. On Hurt Me Plenty: two revenants, two arch-viles, two barons of Hell, and one mancubus. On the first two difficulty settings: two spectres, two revenants, two Hell knights, and one arch-vile.

When you get the key, you should be able to use the teleporter to exit. You will be back in the large room just before the lava river. Go back and head through the blue door and go until you reach two doors on the northwest. Pick the one on the right, take the lift, and go all the way down this hall. Right where the lion head is on your left, slightly drop down, and you will see a small alcove with a satyr switch which you should press. This lowers a large wall containing a BFG9000 and exposes you to an open field with caged imps, some revenants, and a spider mastermind. A pool of slime with an arch here holds the next switch to press. This lowers a barrier close to where the red key is on the western side. You need to press the switches in this room to open the next barricade; be prepared to fight after each switch press. The satyr switch at the end of the western hall will finally lower the key.

Now backtrack to the blue door and take the red door this time. Take the door on the right and go on until you are in a bricked area with a staircase to a door and a switch at the far end. The whole area shapeshifts and you will end up in a four-way intersection surrounded by large blocks, some have barons of Hell on them. To get the yellow key, what you need to do is go to each side room here and flip the switches. You will trigger revenants, but also lower the yellow key by each bloodfall piece. Pick up the key and you will then be able to leave. Take the yellow door. Be extremely careful, as you will be dealing with several faux exit switches and triggers, all of which reveal heavy weapon dudes around you. The last one you press will reveal the real exit, guarded by an arch-vile and even more chaingunners.

The first secret requires an arch-vile jump to trigger the secret. However, the arch-viles are only tagged to appear on medium and hard modes. On easy mode, they are replaced by revenants. So 100% secrets is impossible to achieve on easy mode without cheating.

* The vertex count without the effect of node building is 9906.

Linguica implemented the barons of Hell on the floating marble cubes with the intent to "thumb [his] nose" at UV max speedrunners.[1]