MAP28: Ogdoad is the twenty-eighth map of Epic 2. It was designed by Alexander S. (Eternal) and uses the music track "". The par time defined in MAPINFO is 7:00. 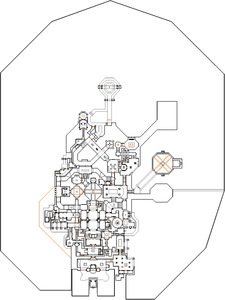 Map of Ogdoad
Letters in italics refer to marked spots on the map. Sector, thing, and linedef numbers in boldface are secrets which count toward the end-of-level tally.

This map plays very similarly to Darkdome from Eternal Doom in that it is a large fortress with several defunct switches. The aim is to have the player place markers on the automap whereever there is a gray skull switch to remember its location for later. The eight switches are used to lower the red key. The player must first get to the blue and yellow keys first, then return to the red key room and open the yellow door. The three yellow skull switches in this room will activate each of the skull switches the player has seen, allowing the player to go back and use them to activate the ones in the red key room.

* The vertex count without the effect of node building is 4507.