MAP28: Rusted Turmoil is the twenty-eighth map of NDCP2. It was designed by Lee Wallis (DooMAD) and uses the music track "Irresponsible Hate Anthem" by Marilyn Manson. 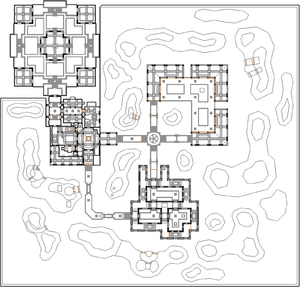 Map of Rusted Turmoil
Letters in italics refer to marked spots on the map. Sector, thing, and linedef numbers in boldface are secrets which count toward the end-of-level tally.

The step in Secret #2 prevents access to the secret, meaning that the maximum number of secrets possible on this map is 50%.

* The vertex count without the effect of node building is 11535.