MAP28: Sacrificial Grounds is the twenty-eighth map of Whispers of Satan. It was designed by Kristian Aro, who also wrote the music track for this level, "Last Man Standing (Sacraficial Symphony)". 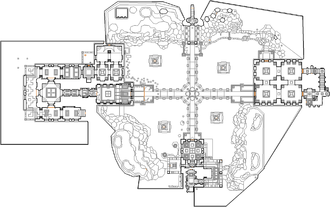 Map of Sacrificial Grounds
Letters in italics refer to marked spots on the map. Sector, thing, and linedef numbers in boldface are secrets which count toward the end-of-level tally.

Turn right at the beginning. There are two open halls you can take here. Go to the right one and hit the switch here. Then, go through the other open hall and follow it all the way to a switch. Press it and return to the beginning to find the door open to the middle of the map. Head to the four-way intersection here and take the path branching westward. Open the door and head down the hall until it branches in three directions. Head left from there, and head left again to find a baron of Hell guarding a large skull switch. Flip it, and then head all the way west, north, and then east through the open door. Go east until you see an eye switch to your north, and then press it. You will lower the blue skull key that can be seen through the western window, so open the door nearby to get the key. Look out for the arch-vile, cacodemons, and pain elementals as you leave, and then return to the four-way intersection. This time, go east to the next building. Head to the northeast to find the blue door. Ascend the stairs following the path to the switch, and after pressing it, the yellow key you see through the cage is lowered. Head back out to the entrance of the building and you will find monsters have appeared here, so kill them and head to the southeast door to claim the yellow key. The yellow door is to the northwest, leading back outside. Head across the rocks until you reach the wooden bars, then turn right and climb the rocks there. Kill the arch-vile and imps guarding the eye switch, then press it to lower the wooden bars. Grab the red key behind the bars and go back to the four-way intersection. Head north and press the switch next to the red bars to open the way to the exit.

* The vertex count without the effect of node building is 11851.