MAP28: The Bloodwall is the twenty-eighth map of Plutonia 2. It was designed by Alexander S. (Eternal), and uses the music track "Gut Wrencher" by Robert Prince, originally composed for Duke Nukem 3D. The par time defined in MAPINFO is 7:00. 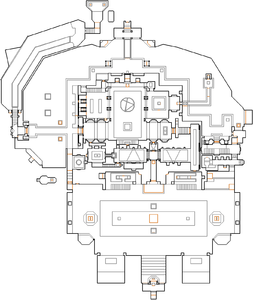 Map of The Bloodwall
Letters in italics refer to marked spots on the map. Sector, thing, and linedef numbers in boldface are secrets which count toward the end-of-level tally.

Take the teleporter at the start and hit the skull switch to raise the platform. At the top, head east, then look right for a skull switch. Pressing it opens the door at the other end of the hall. Head through and climb the steps. Attempting to open the next door causes the ground to lower, where a revenant greets you from the right. Open the door now into a large area. You will see the yellow key to the north and a skull switch to the south. Climb the steps up to the switch and press it, lowering the super shotgun platform as well as the yellow key platform. Dispose of the cyberdemon who teleports in and grab the key. Look out for pain elementals as you grab the key and are heading for the yellow door to the west side of the large room.

Outside, you will find some rough situations, such as two revenants across the bridge that if killed, get resurrected again. Head for the northern side of the outer area where there are plenty of enemies like revenants and imps. Dispose of them and press the skull switch on the other side of the invisible bridge to the north. This lowers a platform containing a soul sphere, but also lowers a barred passageway that you passed on your way here. Kill the mancubus and head up the stairs to a library section. Kill the demons here, and press the skull switch you find, killing monsters lowering from the bookshelves and the cages on the left. The switch raises some ground so you can get the blue key overlooking the large room from before as well as cross over to the other side. Over there, press the skull switch and kill the Hell knights, demons, and imps you find. Then press the lit side of the floating skull block to lower the wall behind you. Dispose of the revenants and arch-vile, then hit the gargoyle switch to trigger a lift. Follow the path beyond it and get rid of the arch-vile and baron of Hell guarding the eye switch.

That switch lowers some platforms that you crossed on your way to the eye switch. Drop down and you will be back on the walkways, now able to go southward. Open the door at the top of the steps, then head up the left staircase inside. To your right is a door that cannot be opened yet, and to your left is a lift that goes down. In the room that follows, the back side of the lift has a switch which opens up the door, so press it and ride back up. Past the door, kill the enemies you find and follow a corridor to a lit gargoyle switch. Shooting it surrounds you with chaingunners, but also removes a bar blocking another switch. Press this one to make the next door open, and then take the lifts down to a very large and open area.

By grabbing the BFG9000 in the middle of this very large area, two cyberdemons will appear. Kill them, and press the switch that one of them was guarding. This opens up the two doors to the south, and barons and arch-viles come pouring out of there. Inside their small room, use the switch for a lift going up, and then use the next switch. Back at the large area, two side blocks will lower revealing gaggles of revenants. Waste them, and you will notice that they were guarding two switches. Both of them raise the stairs to the north, while also revealing a few monsters south of the switches. Upon raising the stairs, you need to climb both of them, and then head inside the interior sections of both. Each has a switch, which lowers the walls and surrounds you with some monsters, but also reveals a lever switch you need to use. Both lever switches raise up the lift in the north center of the room. You need to hit both of them. When you do, use the lift to ride up to the door, and face off against the arch-vile and army of revenants so you can get the red skull key.

After getting the key, another cyberdemon will appear into the arena, so get rid of him. Then head for the northwest corner of the area and use the red skull switch. After that, use the red columns to lower them as lifts, then ride up. You will find yourself back on the spanning paths from before, and with the red key, you can now go across the bridge going west to the red door. Open it, and if you look left you will find a switch. Press it and you will hear crushers, which gets rid of the arch-viles who kept resurrecting the revenants from before. You can kill them now without worry of them being resurrected. From the red door, go north and across the invisible bridge, taking out chaingunners, cacodemons, and revenants along the way. Up the stairs, use the lift, and kill the enemies who are guarding the two exit teleporters. It is suggested that you take the one to your left to immediately exit the map, unless you want to start the next map with very low health.

At the end of the map there are two exit platforms. Stepping on the left one (textured the usual black metal) exits the map as usual, while stepping on the right one (textured with blood splatters) teleports you into a barrel, telefragging it so you receive a lot damage. Even worse, like in MAP11: Arch-Violence, you are on a type 11 damaging floor that drains your health until it becomes 10% or below and finishes the level.