MAP28: The Power to Believe is the twenty-eighth map of 32in24-5, a deathmatch megawad. It was designed by Shaikoten, asspants, Nick McCarthy (DD_133) and Sarah Mancuso (esselfortium), and uses the music track "Koopa No. 3," originally composed by Koji Kondo for Super Mario 4, orchestrated and sequenced to MIDI. 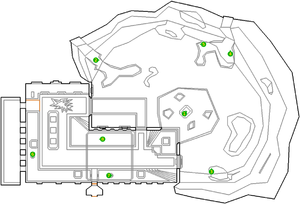 Map of The Power to Believe 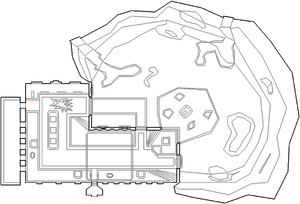 Map of The Power to Believe

This map has a simple layout. It consists of an outdoor area to the east, and an indoor area to the west that features an elevated secton. A balcony extends from the upper level of the building into the centre of the outdoor area, where players can find the rocket launcher. The building has three entrances; north, centre and south, and the latter two both entering at roughly the same part of its main hallway. Along the southern edge of the main hallway, players can find a green armor and the door to the exit room, which contains no items.

A lift to the upper level is located in the north-west corner, which serves as a path to not only the central balcony, but also the BFG9000, by following the walkway along the upper level, round each corner of the building, jumping across three gaps with the aid of steep steps to add height to the jumps. The BFG itself is in the north-west corner, overlooking the lift.

The outdoor area features short rivers of lava, which are not damaging.

* The vertex count without the effect of node building is 962.